Subcutaneous tissue emphysema in general terms is defined as an abnormal presence of air under pressure, along or between fascial planes. A sudden blast of air, during an ongoing endodontic treatment or an endodontic surgery can sometimes cause movement of this air through the loose connective tissue layers to distant areas. In case of occurrence of emphysema, the condition should be carefully examined as the entire diagnosis is based merely on clinical examination. The clinician should be aware of the common causes, characteristic diagnostic features, possible complications and the management of the condition. This entrapped air in some cases is self healing and in some cases can lead to serious complications and death. The case report described is a successful management of unintentional and unfortunate tissue emphysema. The case report also emphasis on the importance of timely and accurate diagnosis of the condition.

Subcutaneous emphysema (SCE) is defined as “the penetration of air or other gases beneath the skin and sub mucosa, resulting in soft tissue distension”. The word emphysema is derived from Greek word ‘whick’ which means ‘to blow in’.1 In general terms it may be defined as presence of abnormal air under pressure, along or between the fascial planes.2 First case of subcutaneous air emphysema in dentistry was documented in 1900 soon after a dental extraction, when a bugle player started playing his instrument. Since these old times, the occurrence of cases of subcutaneous emphysema, during a dental procedure are mainly associated with the surgical resection of impacted teeth or introduction of air via the high-speed handpiece during the restorative procedures.3

The entrapment of compressed air usually occurs rapidly, often causing morbidity and in severe cases may even cause death. Subcutaneous facial emphysema (SFE) during an endodontic treatment is a less frequently occurring complication and is mainly encountered during use of air driven high speed hand – pieces and use of air syringes for drying the canal and irrigation.4

The spread of tissue emphysema is often rapid, oedematous and extensive. The emphysema has the potential to spread along the fascial planes both superiorly and inferiorly from the site of operation and in some rare cases may even cross the midline.2 The facial and suborbital planes consist of loose connective tissue containing potential spaces between layers of muscles, organs and other structures. Once air enters the deep soft tissue under pressure, it will follow the path of least resistance through the connective tissue, spreading to distant spaces. Air entering the para – pharyngeal and retro – pharyngeal spaces can lead to soft tissue infections, airway compromise, optic nerve damage and even death.1

SCE in conjunction with endodontic treatment usually lasts for several days to a few weeks, often resolving in facial regions. In cases where the neck is involved, respiratory difficulty may develop as a complication. If this occurs, hospitalization usually follows with preparations made for tracheotomy and the potential for mediastinitis.5

A 37–year–old female patient reported to the Department of Conservative Dentistry and Endodontics two months back. The patient complained of swelling and redness above and below her left eye (Figure 1). The patient gave a history of developing a swelling immediately after an ongoing dental treatment. The previously operating dentist was contacted for a detailed history. The dentist admitted of using compressed air from a three way syringe repeatedly, for drying the canal, while doing an endodontic treatment of left maxillary lateral incisor. The patient also complained of persistent and severe sensitivity on the affected side of the face. 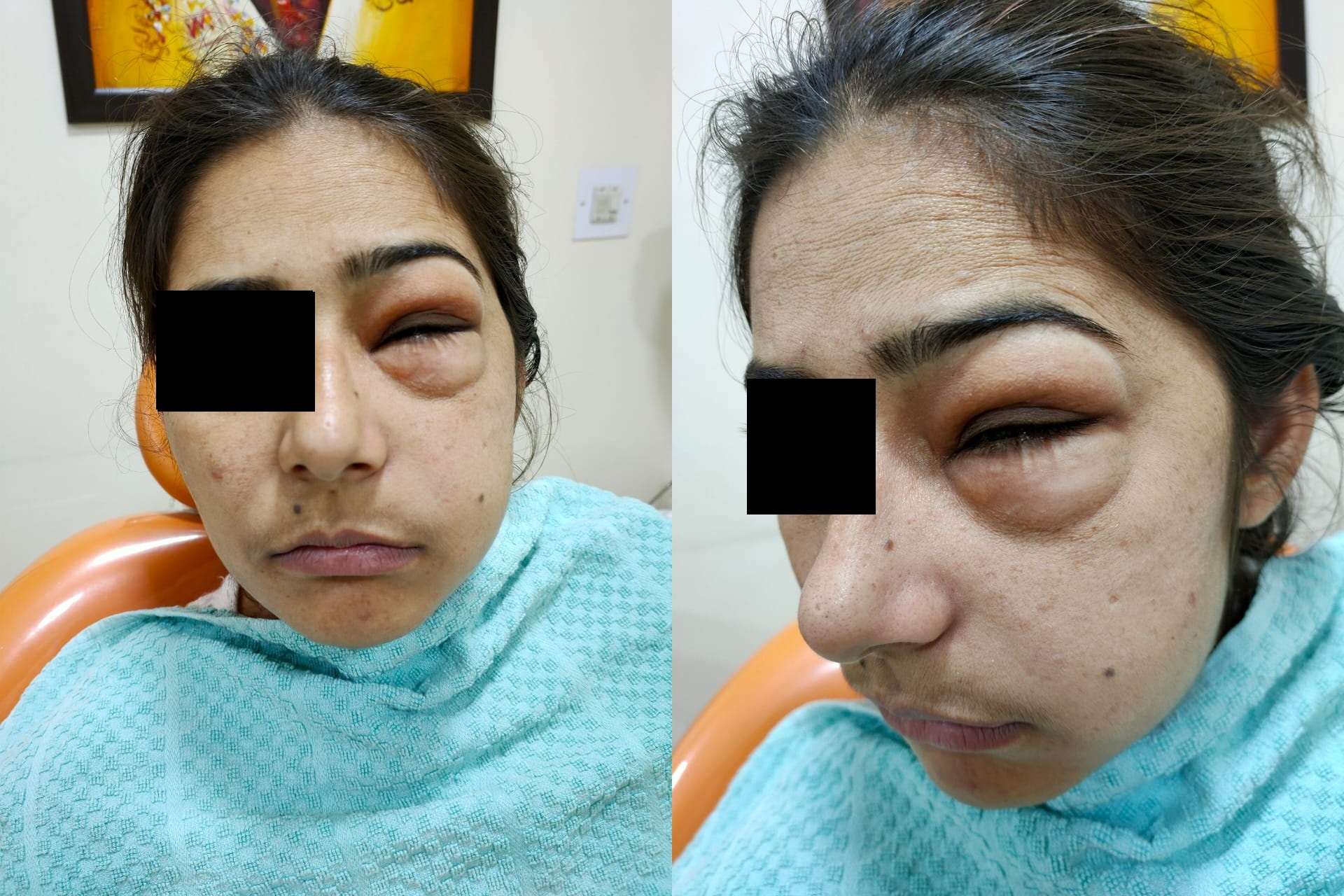 On physical examination, she was found to have soft skin colored swelling with a prominent unilateral crepitus below the eye. The swelling was diffuse and extended till her left eyebrow superiorly and the suborbital region inferiorly. The extent of swelling was from bridge of nose medially, to the outer canthus of eye laterally. Eye on the affected side appeared small and reddish in color. Radiographic examination of the involved tooth did not show any abnormal variations in the periapical and peri-radicular tissues, except a well defined radiolucency in the crown indicating a prior attempt of access cavity preparation.

The treatment plan selected for the patient followed a conservative non – surgical approach. The entrapped air was allowed to escape by diffusion through the oral tissues, along with the prescribed antibiotic coverage to prevent any secondary infections. The patient was prescribed tab Augmentin Duo 625mg b.d. for five days and the patient was recalled after 5 days for follow up. Over the next seven days, the subcutaneous emphysema resolved progressively and the patient became completely asymptomatic. The fascia on the affected side appeared normal with no visible discolorations, at the follow up appointment (Figure 2). The previously started endodontic treatment of the involved tooth was completed, and the tooth was sealed with a permanent restoration at this appointment. 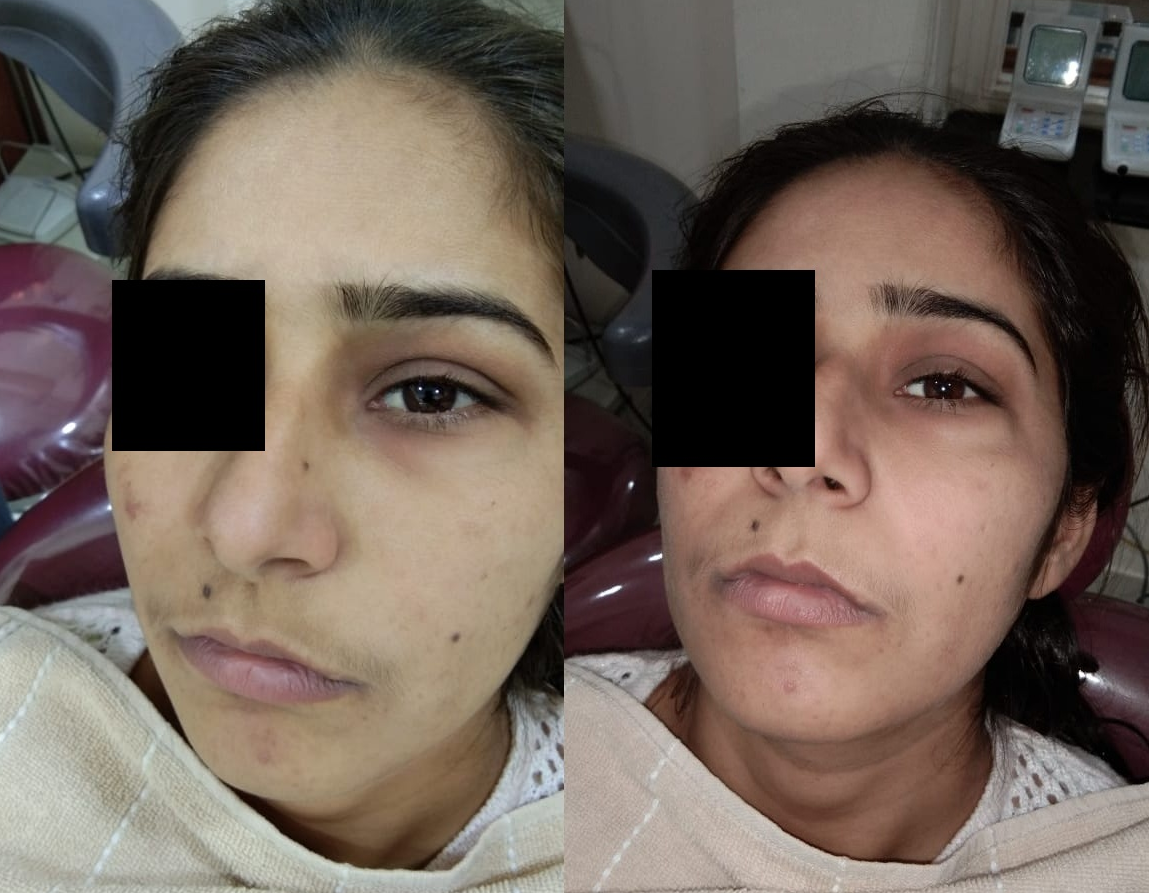 The subcutaneous emphysema is an uncommon but an unfortunate mishappening of an ongoing endodontic treatment. The two possible routes of air entry into the fascial is through root canal space or the dento–alveolar membrane.4 During an ongoing endodontic treatment, delivery of the compressed air through an air syringe, or a high – speed hand – piece is associated with almost 71% of the cases.6 The use of this compressed air intra-orally poses the patient to an increased risk of tissue emphysema. The two most common instances causing emphysema are; first, use of a sudden blast of air to dry the canal and second, air from a high-speed drill during an apical surgery. Other means of introducing air into fascial spaces are use of dental laser in gingival pocket, introducing hydrogen peroxide or sodium hypochlorite beyond the apex and in cases lacking appropriate rubber dam isolation.7 However in present case, air entrapment was caused by use of compressed air from a three way air syringe to dry the root canal.

Hence, from an endodontic perspective, the occurrence of this unfortunate accident can be greatly prevented by a careful and attentive procedure. The various measures to be adopted are 1, 4

The signs and symptoms of subcutaneous emphysema after a procedure vary, some cases report with immediate signs of swelling, while other cases become symptomatic in minutes to hours after the procedure. The most prominent feature of subcutaneous emphysema are diffuse swelling and characteristic palpable crepitus on swollen side.8 Pain is variable and usually of short duration, sometimes only a slight discomfort is felt. If the neck is involved there is some discomfort with difficulty in swallowing.4

If emphysema does occur, an appropriate and timely differential diagnosis from angioedema, hematoma or infection should be made first. Crackling is the most important sign that makes it different from other pathologies. On the other hand, cases of emphysema are differentiated from infections, as the infectious cases do not have a rapid onset like emphysema.8 Radiographs can also be used as an adjunctive aid in diagnosis as they confirm the presence of air in soft tissues.9

While managing a case of subcutaneous emphysema, the foremost consideration should be maintenance of airways and prevention of infections. Hence, the patients are administered with prophylactic antibiotics because the entrapped air is non sterile. Broad – spectrum antibiotics work best against oral flora, such as beta – lactams and cephalosporins may be used. These antibiotics are usually administered orally, but if spread of subcutaneous emphysema is extensive, then immediate hospitalization and intravenous administration of antibiotics is recommended. Analgesics may be prescribed along with antibiotics for pain relief, if any.2, 4 Some severe cases of subcutaneous emphysema may still present several complications, despite the treatment provided. The most common complications encountered are cardio – pulmonary distress, secondary infections, necrosis of involved tissue and pneumo – mediastinum.

The thumb rule in emphysema prone cases is “Prevention is better than Cure”. The patients undergoing a dental or surgical procedure should be given strict postoperative instructions. These include avoidance of coughing, smoking, blowing the nose, using straws, gargling, playing musical instruments, or any other activity that may increase intraoral pressure.4

Occurrence of tissue emphysema in dental practice is rare. A detailed history of the case and an efficient palpation and examination of the affected area is necessary to evolve at a definitive diagnosis. An accurate differential diagnosis of the condition is very necessary for an effective management.

The condition is usually self resolving under antibiotic prophylaxis. In case of any complication or neck involvement immediate hospitalization and thorough monitoring are recommended.