Objectives: To evaluate and compare the asymmetries in subjects with two malocclusions that is Class II subdivision, Class II div 1 and normal occlusion.

Perfect symmetry is largely a theoretical concept that seldom exists in living organisms. Variations in size, shape and relationship of dental, skeletal and soft tissue facial structures are important in providing each individual with his or her own identity.1 Stedman’s medical dictionary defines symmetry as “Equality or correspondence in form or parts distributed around a center or an axis at the two extremes or poles, or on the two opposite sides of the body.2 Symmetry when applied to facial morphology refers to the correspondence in size, shape and location of facial landmarks on the opposite sides of the median sagittal plane.3 Asymmetries can be classified according to the structures involved into dental asymmetries, skeletal asymmetries, muscular asymmetries and functional asymmetries.4 Asymmetry of craniofacial skeleton is most readily diagnosed in frontal view than from any other view. 5 The etiology of asymmetries include:1 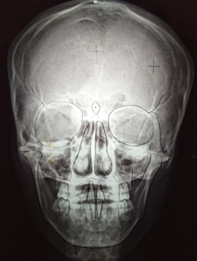 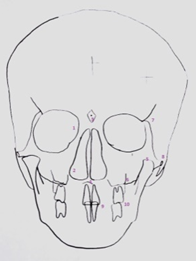 The angular measurements (Figure 3) taken are from 1-4. 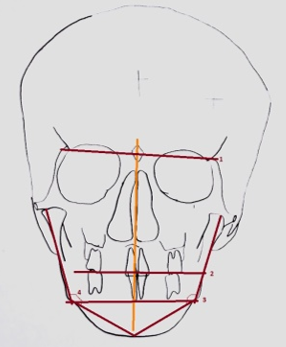 The unpaired linear measurements (Figure 4) taken are from 5-8. 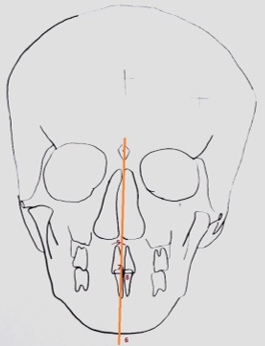 The paired linear measurements (Figure 5) taken are from 9-18. 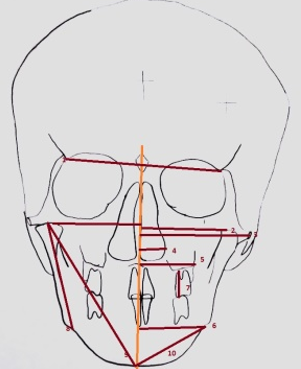 Comparison of linear unpaired measurements between the malocclusions (Figure 6).

Significant structural facial asymmetries are not easily amenable to orthodontic treatment. These problems may require orthopaedic correction during the growth period and/or surgical management at a later point.1 The present study analyzed the degree of facial asymmetry associated with Angle’s class II subdivision, Angle’s class II div 1 and Angle’s class I malocclusions. The postero-anterior cephalograms were obtained in centric occlusion for the elimination of postural asymmetries and to ensure accuracy in the evaluation of mandibular asymmetry in relation to the maxilla and the cranial base. Grayson et al., Grummons and Kappeyene Van de Coppello, Proffit, Ricketts et al., Owen, Fish and Epker, Williamson and Mongini, Sollar, Svanholt and Solow, Moyers et al, Athanasiou et al, Solow, Ingerslev and Solow, Nakasima and Ichinose, Droschl have evaluated and analyzed the symmetries of craniofacial skeleton using PA cephalograms.6, 7 The present study was done based on the analysis proposed by Grummons and Kappeyene Van de Coppello in which, the angular, linear and linear unpaired measurements were compared within the study groups.

No statistically significant difference in Z plane angle was seen in any of the malocclusions which related to findings of Harvold, in which he found that zygomaticofrontal suture and crystal galli are relatively symmetrical structures compared to other facial landmarks that are farther from the cranial base.1

No statistically significant results in angular measurements was seen which is similar to a posteroanterior cephalometric study conducted by Gerald Letzer and Joseph Kronman in which various angular measurements were compared in patients with excellent occlusion and in patients with malocclusion other than Class III.8 Similar results have been observed in the current study in which various parameters such as NC to X and J to X and also Cd to Me showed statistically significant in all the three groups of malocclusions. In Class II subdivision cases the occlusal plane angle, antegonial angle, Cd to Ag distance, Cd to Me distance which represent the ramal length and total mandibular lengths respectively did not show any statistically significant differences which is contrary to a study done by Nazeema Jabeen et al in which they have found differences in Angle’s Class II subdivision malocclusion.9

From the research following conclusions can be drawn: