Clinical and radiological aspects of mandibular fractures: A review of 128 cases

Objectives: The objective was to study the epidemiological, clinical and radiological aspects of patients with mandibular fractures in the odontostomatology department at the General hospital Idrissa Pouye in Senegal.

Materials and Methods: This was a retrospective study of the records of patients who came for a mandibular fracture during the period from February 2007 to June 2019 to the odontostomatology department of the General hospital Idrissa Pouye in Dakar. The inclusion criterion was any patient file containing complete information and presenting a mandibular fracture received in the odontostomatology department. We used sociodemographic, clinical and radiographic variables.

Results: Of 128 patients who came for consultation with a mandibular fracture, 115 were male and 13 were female. The age group most affected was between 21 and 30 years. Workers (25.2%), pupils and students (25.2%) were the most represented. The most frequent cause of mandibular fractures was road traffic accidents (36.71%). In 41% of the road accidents, Jakarta mopeds were involved. The diagnosis was confirmed by radiological examination, which consisted of an orthopantomogram in 83.5% of cases. The mandibular symphysis was the most frequent location with 40.3% of fracture sites. Total continuity of the lines was observed in 21.9% of cases.

Mandibular fractures are an important part of maxillofacial trauma, which is becoming increasingly common. They may constitute a medical emergency due to the haemorrhage or glossoptosis (tongue obstructing the upper airway) that they may cause.1 They are a frequent reason for consultation at the odontostomatology department of the General Hospital Idrissa Pouye,2 which receives other facial trauma patients referred by practitioners from other regions of Senegal.

The objective was to study the epidemiological, clinical and radiological aspects of patients with mandibular fractures in the odontostomatology department at the General Hospital Idrissa Pouye in Senegal.

This was a retrospective study, which involved patients who came for a mandibular fracture, during the period from February 2007 to June 2019. The study was based on the analysis of the records of patients treated for a mandible fracture at the odontostomatology department of the General Hospital Idrissa Pouye in Dakar. To be included in the study, each file had to contain information on socio-demographic data, circumstances of occurrence, clinical and radiological aspects. For each file included, we noted sociodemographic variables, clinical and radiological variables. Word, Excel and SPSS 13.0 software were used to analyse the data, for the calculation of frequencies, means, standard deviations and percentages. 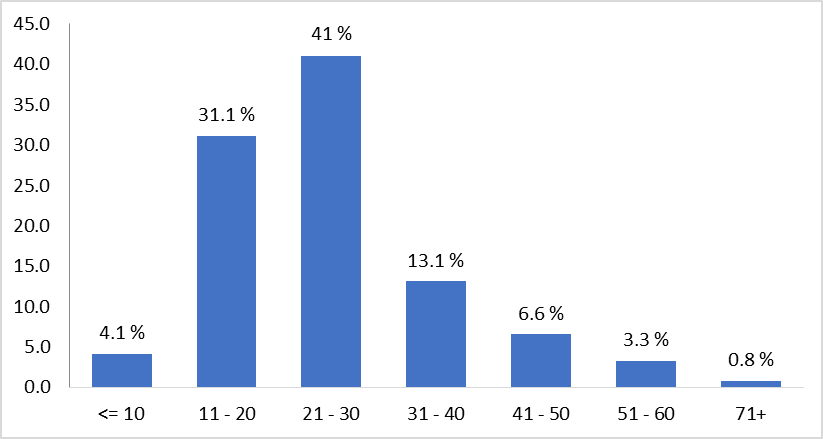 The most frequent cause of mandibular fractures was road accidents (36.71%).

“Jakarta” mopeds were involved in 41% of road accidents (Table 2).

Distribution of the population by occupation

Distribution of the population by etiology

The diagnosis was confirmed by radiological examination, which consisted of an orthopantomogram (dental panorama) in 83.5% of cases, followed by the lower face (26.8%) and the maxilla parade (21.3%) (Figure 2).

Full line continuity was observed in 22% of cases and partial line 78%.

This loss of occlusion involved the anterior sector, the posterior sector or both (Figure 3).

Distribution of the population by type of imaging 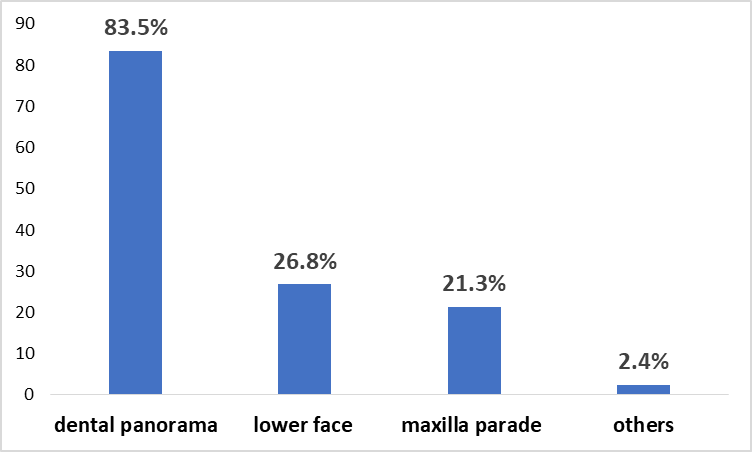 Distribution of the population by fracture site 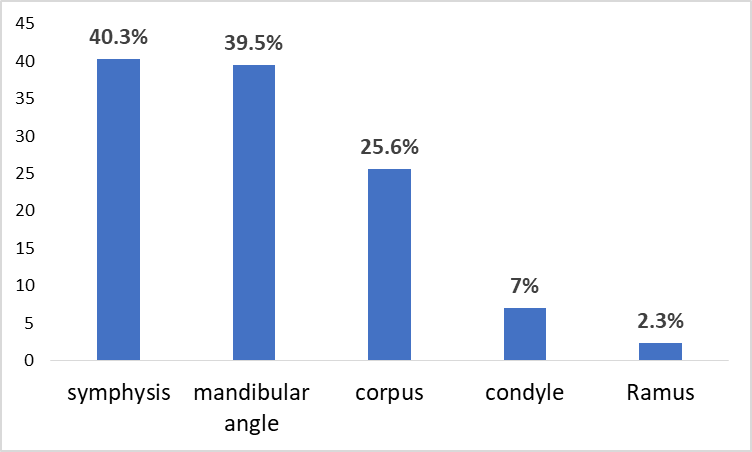 Distribution of the population by number of fracture lines 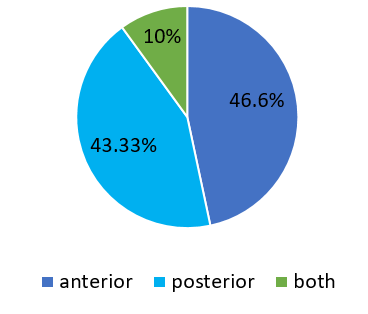 The number of cases received (128 over twelve years) is down from the 2009 study (103 over four years).2 This could be explained by the presence of oral surgery specialists in regions outside the capital.

The high frequency of mandibular fractures in this age group could be explained by the high level of physical and professional activity at this period of life and the clear predominance of young people in the age pyramid in Senegal.2 Our results are similar to studies from Taiwan,3 Egypt,4 Cameroon5 and India6 where the most affected age group was between 20 and 30 years.

This could be explained by the fact that males are more exposed to various etiological factors of mandibular fractures, particularly road traffic accidents, brawls, assaults, games and violent sports. Women were more exposed to falls and slips during domestic work.2

Workers, students and the unemployed were the most represented as reported in the study by Dia Tine in Senegal.2 The strong predominance of workers is thought to be due to the non-respect of safety conditions required in the workplace, especially on building and infrastructure construction sites, which have been expanding in recent years. On the other hand, studies by Kontio in Finland and Oikarinen in Canada have shown that sportsmen and women are more prone to mandibular fractures.9, 10

Moreover, the increase in cases of interpersonal violence and brawls in our series could be related to the change in the behaviour of Senegalese society, which has become violent and aggressive, or to the growing insecurity in certain underprivileged areas. In several countries, such as France, Canada and Madagascar, acts of interpersonal violence (brawls and assaults) represent the main etiology of mandibular fractures with respectively 57%, 53.3% and 55.8%.16, 10, 17

Falls account for 13.3% of aetiologies. According to Dia Tine,2 falls from the top of a tree are a Senegalese peculiarity, generally occurring in rural areas during the fruit-picking season.

This relatively low percentage in this study could be explained by the installation of more oral surgery specialists in the interior of the country, but also by the organisation of training sessions for the management of mandibular fractures.

The diagnosis was confirmed by a radiological examination consisting of an orthopantomogram in 83.5% of cases, followed by the lower face (26.8%) and the maxillary arch (21.3%). The predominance of the orthopantomogram is explained by its availability at the Hogip odontostomatology department as of 2016.

Dia Tine had recommended combining face-down and maxillary defilement views to properly visualise mandibular fracture patterns in both the front and side views.2

Mandibular fractures were most frequent in the symphyseal and parasymphyseal regions (40.3%), followed by those in the mandibular angle (39.5%).

Our results are similar to those of Givony in Lithuania,18 Pognon in Benin,8 Trigo in Congo,15 Dia Tine2 and Srinivasan13 where the respective rates were 35.71%, 31.3% and 55.3%. Indeed, due to its prominent position, the mandible constitutes one of the bumpers of the face.

There is probably a correlation between the paraspympathetic location of the fracture and road traffic accidents where the impact is more frequently received on the chin by direct impact.16

Other authors such as Bouguila, Sakr and Anyanechi found that the most frequent location was the mandibular angle with respective rates of 24.4%, 22% and 31.3%.11, 4, 19 Indeed, according to Krimmel and Fuselier the probability of having an angle fracture increases in the presence of an impacted or impacted wisdom tooth.20, 21

The diversity of clinical forms of mandibular fractures is explained by the complexity of the interacting factors. Indeed, Razafindrabe has shown that the point and force of impact as well as the ability to absorb forces in the bone significantly influence the clinical form.17

According to Touré, when the point of impact is on the chin, the fracture first occurs in the symphysis region and then the abrupt retropulsion of the mandible pushing the condyles into the glenoid cavity results in a condylar fracture.23 When there is a lateral impact at the angle, the mandible tends to close, most often resulting in an angle fracture coupled with a symphyseal fracture.

In symphyseal fractures, bilateral forms may result in a downward and backward displacement of the symphyseal region, with a risk of posterior fall of the tongue; whose genioglossal muscles insert on the geni processes, thus potentially causing respiratory distress.24

Oblique fracture lines were more represented with 67.96% while vertical orientation was 32% of cases.

Fracture patterns in the mandible depend on the magnitude of the force, and the density of the bone which is more compact compared to the maxilla.

The vertical orientation is often related to the general axis of the teeth which are implanted in a socket with often thinned cortices.

The orientation of the fracture line determines whether the fragment is mobile or not, which will determine the risk of secondary displacement and symptomatology.24

Displacement is strongly linked to the action of the lift muscles, which cause the posterior fragment to rise, while the depressor muscles lower the anterior fragment, creating a step-like displacement.25

Fractures with full continuity are the cause of most joint losses due to the displacement they cause in terms of overlap, angulation and torsion.26

This loss of dental articulation depends on the condition of the soft tissue surrounding the area and the direction in which the masticatory muscles pull the fractured bone fragments.27

Mandibular fracture is a frequent reason for consultation in the odontostomatology department of the idrissa Pouye general hospital. It can be considered as a medical emergency because of the haemorrhage, but also because of the respiratory disorders that can result from it. In our results, road accidents were the most frequent cause of mandibular fractures with 36.71%.