Materials and Methods: Cephalograms of 150 individuals (aged 18-23 years), taken in Natural Head Position (NHP) and tongue at rest were divided into three groups i.e. Group 1 – Class I Normal occlusion, Group 2 – Class II Division 1 Normodivergent and Group 3 – Class II Division 1 Hypodivergent, consisting of 50 samples each. To ensure the rest position of tongue, patient was asked to relax for 30 seconds after coating the tongue with barium sulphate in midline and then to swallow, and the X-ray was taken at the end of swallowing. Each group was divided into two subgroups according to sex. Groups were constituted according to the Frankfort mandibular plane angle (FMA) angle. The subjects who had skeletal Class II pattern due to mandibular retrusion and not due to maxillary prognathism were only included in the study group. Statistical analysis was done using the software SPSS version 21.0. The statistical tests used were unpaired t-test and One-way ANOVA test with post-hoc bonferroni test. The p-value was considered significant if less than 0.05.

Conclusion: The study supports the existence of a relationship between posture & dimensions of the tongue with Class I and Class II skeletal patterns.

The influence of the soft tissues in craniofacial growth has been found to be highly relevant to the orthodontic diagnosis and treatment plan.1 It is now widely accepted that an interaction exists between muscle function and dento-facial forms. However, it has long been debated whether muscle function influences bone morphology or merely adapts to the local changes in environment.2 For years, orthodontists have theorized that the size, posture and function of the tongue must have some relationship to surrounding oral cavity. Several clinicians emphasized the size of the tongue and its dysfunction as an essential etiological factor in the development of malocclusion. On the contrary, some reports stated that the tongue merely adapts to environmental changes for swallowing and for speech.2, 3, 4, 5, 6, 7 It is quite generally believed that tongue is an important factor in the development of jaws and dental arches as abnormalities of either tongue posture or function could possibly contribute to the development of malocclusion and speech problems. However, it is also possible that the malocclusion and speech defects could be the causes of abnormal posture and function of the tongue.8 For this reason treatment planning in orthodontics all too often tends to be focused on the more easily assessed skeletal variations whilst ignoring the role of the muscular environment of the teeth in the etiology and prognosis of the malocclusion.9 Therefore, a dental professional must identify abnormal tongue postures and movements that might have an adverse effect on the dentofacial morphology and possibly halting the treatment progress or leading to relapse in some cases.2

Since, cephalometrics is a useful clinical tool in orthodontic diagnosis and treatment-planning, the objective of our study was to assess tongue posture in adult patients with Class I and Class II skeletal patterns and to evaluate sexual dimorphism and variation among population.

This study was based on 150 individuals comprising of both males and females in the age group of 18-23 years. Lateral cephalograms were taken in NHP and tongue at rest.

The sample for evaluation of tongue posture and dimensions was divided into three groups i.e. Group 1- Class 1 Normal Occlusion, Group 2 - Class II Division 1 Normodivergent and Group 3 - Class II Division 1 Hypodivergent, consisting of 50 samples each. Each of these groups was further divided into two subgroups, consisting of 25 male and 25 female subjects. Sample size calculation: The sample size was calculated according to the formula used

Where N denotes sample size, s is the standard deviation obtained from previous study, and d is the accuracy of estimate or how close to the true mean. Zα/2 is normal deviate for two- tailed alternative hypothesis at a level of significance.

So the minimum sample required for the study per group was 43, but considering the error and drop out, the sample size was increased to 50 per group.

The normal occlusion group was screened on the basis of Down’s parameter and the individuals under the normal range formed the control group. The individuals for the study were selected according to Angle's system for classification of malocclusion. The sample was divided into Normodivergent and Hypodivergent growth pattern on the basis of FMA (Frankfort mandibular plane angle). Also, the subjects who had skeletal Class II pattern due to mandibular retrusion and not due to maxillary prognathism were included in the study group.

The lateral cephalograms were taken with the subjects in Natural Head Position. Tongue of each subject was coated with Barium Sulphate before taking the X-ray to obtain the better visualization of tongue outline on X-ray film.

Tongue height and length were measured according to reference lines suggested by Lowe et al10 and tongue posture measurements were carried out on the basis of Rakosi analysis.11 The following measurements were made on the lateral cephalogram. 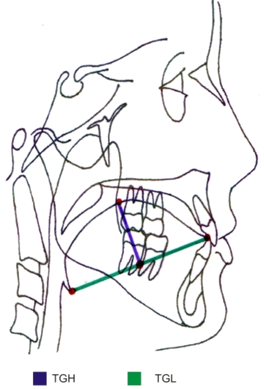 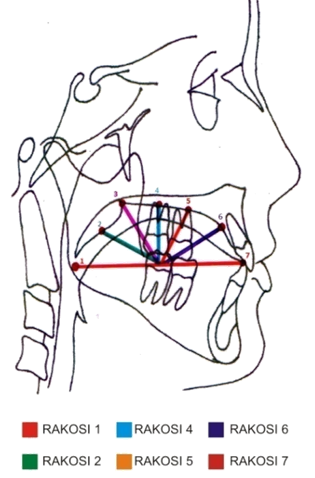 The data obtained was subjected to statistical analysis. The software used for the statistical analysis was SPSS (statistical package for social sciences) version 21.0 and Epi-info version 3.0. The statistical tests used were Unpaired or Independent t-test for comparison of mean value between 2 groups, One-way ANOVA (Analysis of Variance) test for comparison of difference between mean values of more than 2 groups. The p-value was taken significant when less than 0.05 (p<0.05) and Confidence interval of 95% was taken.

The present study was undertaken with the intention of evaluating and comparing the posture and dimensions of tongue in individuals with skeletal Class I and skeletal Class II patterns using cephalometric analysis. The data obtained were subjected to statistical analysis and the following results were drawn.

Intergroup comparison of tongue height and tongue length showed that mean TGH and TGL was significantly more in Class I group when compared to Class II division 1 Normodivergent and Hypodivergent growth pattern (Table 2 ). 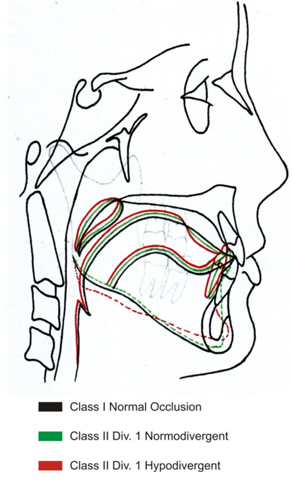 Many researchers have studied the relationship between form and function of the stomatognathic system.2 Form and function of the oral soft tissues, and the tongue in particular, have been related to the growth of the oral cavity, the development of occlusion and malocclusion, and speech defects.12 For years, orthodontists have theorized that the size, strength and position of the tongue must have some relationship to the surrounding oral cavity.13 Brodie14, 15 maintained that dental arch form and size are directly influenced by tongue size. Some clinicians implicate a large tongue or forwardly positioned tongue in the development of certain malocclusions.14, 15 As a result, determining the size and position of the tongue becomes an important part of the orthodontic diagnosis and treatment planning.13

The age group considered in this study was 18-23 years. This group represented a very stable period in the growth and development of head and face. The influence of growth is less and the permanent dentition present is beyond the variability seen during the period of mixed dentition. Moreover, a constant skeletal pattern is established which is subject to less changes. Also, this has been observed that Class II malocclusion associated with a deep overbite is the most prevalent type of malocclusion in this region of Haryana and this kind of malocclusion is generally associated with a horizontal pattern of growth. So, the subjects with skeletal Class II malocclusion with average growth pattern and horizontal growth pattern were chosen for the purpose of this study so that the variations, if any, could be observed in comparison to the Class I normal occlusion group.

There is not much data available from the studies done in the past to support our findings related to the differences in the dimensions of the tongue between groups as most of the studies done previously are based on comparison of postural changes in the tongue during function in different skeletal patterns. However, the reduced values observed in mean TGH and TGL in Class II malocclusion group in present study might be attributed to the selection criteria followed while screening the subjects. As the individuals presenting Class II skeletal pattern due to mandibular retrusion were only included in the study group, the reduced values observed for TGH and TGL might be related to the posteriorly positioned mandible in these individuals. It is known that the tongue position is more backward in subjects with mandibular retrognathism 16and the same can be co-related with the reduced values of the tongue length observed in Class II Division 1 Normodivergent and Hypodivergent subjects in the present study.

On comparing the tongue posture between the three groups, root of the tongue was observed to be closer to the soft palate in Class I Normal occlusion group as compared to Class II Division 1 Normodivergent and Class II Division 1 Hypodivergent growth pattern group. However, the difference observed in mean values between the groups was observed to be insignificant (p-value=0.080). The result found in this study was coherent with the findings of Subrahmanya RM and Gupta S17 (2014) who studied the tongue posture in individuals with different vertical facial patterns and could not find any significant difference in relationship of root of the tongue to the soft palate between the subjects of different skeletal patterns.

The location of the dorsum of the tongue in the present study was observed to be significantly higher at back and lower in the front in Class II Division 1 Hypodivergent growth pattern group when compared to Class I Normal occlusion group (p-value < 0.05). This finding was in agreement to the findings of Rakosi,11 according to which the dorsum of the tongue is relatively high in Class II malocclusions and in cases of Class II malocclusions with deep overbite, the dorsum is high at the back and low in front. In all other cases, however, the dorsum tends to be low.

The tip of the tongue was noted to be closer to the lower incisal edges in Class II Division 1 Normodivergent growth pattern group when compared to Class I Normal occlusion group. However, the difference noticed in the mean values between the groups was not statistically significant (p-value=0.506). This is not coherent with the study of Rakosi11 which states that the changes in position of the tip of the tongue relates closely to the different types of malocclusion. According to his cephalometric study,18 the tip of the tongue is retracted in cases of Class III and also in Class II cases with nasal breathing and even more so in cases of deep overbite. (Figure 3)

The findings generated from the present study suggested that a significant correlation exists between posture of the tongue and facial skeletal pattern. So, the tongue posture also should be given importance during diagnosis and treatment planning especially in patients having growth disharmony in vertical plane.

The following conclusions were drawn from the present study