Aim: To present a case report of extragingival pyogenic granuloma on lower lip which is an uncommon site for pathological entity and also to emphasize the reason for its occurrence.

Case Description: The present article reports a rare case of 55-year-old female with PG presenting rapid growing mass on the lower lip. This article highlights the possibility on the reason for its occurrence which is important for the diagnosis in this atypical location.

Clinical Significance: Pyogenic granuloma is one of the common lesions in oral cavity. This article highlights the pyogenic granuloma on lip which is an unusual site. Although it can be diagnosed clinically, atypical presentations lead to inappropriate diagnosis. Therefore, further investigation by biopsy confirms final diagnosis upon which treatment is instituted. 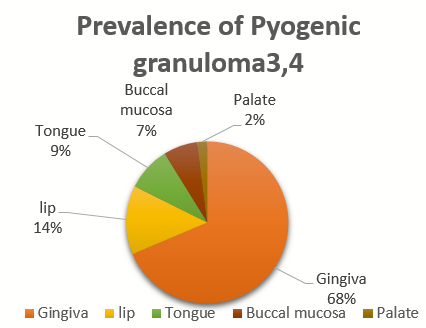 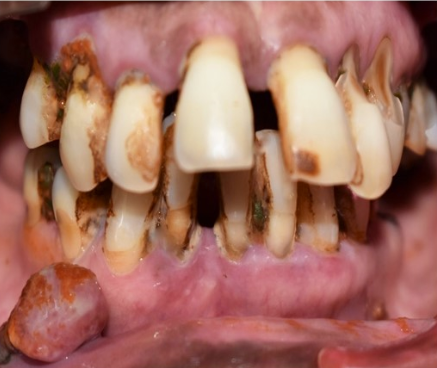 In this article, we have presented a case report of extragingival pyogenic granuloma on lower lip which is an uncommon site for pathological entity and also emphasizes the reason for its occurrence.

A 55-year-old female in good general health reported to the Department of Periodontics, with a chief complaint of swelling on lower lip causing hindrance in speech and mastication since 20 days. The lesion was painless, initially small in size which increased gradually to the present size. Intra oral examination revealed a pedunculated solitary nodule of soft to fibrous consistency. It was pinkish red in color and was approximately measuring 1.5×0.8cm in right mucosal portion of lower lip. The surface was smooth. Oral hygiene was poor with heavy stains and calculus. Grade III mobility was noticed in relation to 31 and 42 with a missing 41. Clinical findings and history gave rise to the provisional diagnosis of traumatic fibroma, venous lake, thrombus, papillary endothelial hyperplasia, hemangioma and pyogenic granuloma.

As per the treatment plan initially, oral prophylaxis was completed. Excisional biopsy of the lesion was done under local anesthesia in aseptic conditions. Post-operative instructions were given. The specimen was sent for histopathological examination. Histopathological examination revealed hyperplastic parakeratinized stratified squamous epithelium. Thick fibrinopurulent membrane was seen covering the ulcerated region. Stroma was highly vascular with endothelial cell proliferation with diffuse to aggregate of chronic inflammatory cell infiltrate. Stroma was fibrous to fibrovascular. The lower lip is supplied by inferior labial artery. Thus, the proliferation of capillaries from this blood vessel may be a cause for lesion. Pyogenic granuloma can be histologically be classified as lobular capillary hemangioma and non-lobular capillary hemangioma.5 In our case report, the confirmed diagnosis of oral pyogenic granuloma was of non-lobular capillary hemangioma type which is characterized by high vascular proliferation resembling granulation tissue. Its central area consists of significantly greater number of vessels with perivascular mesenchymal cells non-reactive for α- smooth muscle actin and muscle specific actin.5for follow up.Satisfactory healing was observed. (Figure 1, Figure 2)

Various vascular lesions of lip like hemangiomas, vascular malformation, thrombus, bruises, papillary endothelial hyperplasia and pyogenic granuloma can occur due to abnormalities in the blood vessels and endothelial cell proliferation. Among these, pyogenic granuloma is the most common lesion. Pyogenic granuloma is an inflammatory hyperplasia affecting the oral tissues. Itsoccurrence was first described in 1897 by Poncet and Dor who called it as botryomycosis hominis who believed the disease to be analogous to botryomycosis of horses (Rivolti). Two years later Sabrazes andLaubie demonstrated the identity of the so-called “botryomycosisStaphylococcus aureusFrench writers have referred to the condition as "pseudobotryomycosis hominis"or "granulome pedicule.6 It is also known by names such as benign vascular tumor, pregnancy tumor, vascular epulis, Crocker and Hartzell's disease. The present term “pyogenic granuloma” was given by Crocker in 1903. However, it is a misnomer as it is neither associated with pus nor does it represent a granuloma histologically. a nodular, sessile or pedunculated mass. The lesion is characteristically ulcerated and hemorrhagic surface due to its vascularity. The color varies from red, reddish purple to pink depending on the vascularity.The size varies from a few millimeters to several centimeters and it is usually slow growing, asymptomatic, painless growth but at times it grows rapidly.2

The case presented here shows localized growth on lower lip with features aforementioned. The growth was since 20 days which interfered with speech and mastication, that prompted the patient to seek treatment. The appearance of the lesion could be attributed to continuous trauma by lip biting as a result of mobility of lower anterior teeth and occlusal interferences. This finding was similar to study done by Asha et al. on the presentation of lower lip lesion.7 Banjar A et al. in his review highlights that the chronic trauma with poor oral hygiene leads to the development of lesion in lower lip.8 In the present study, the patient’s betel quid chewing habit might have also added to advancement of the lesion. Saxena et al. and Yasin et al. reveals that accidental self lip bite followed by its manipulation leading to its appearance in this site.9, 10 Despite the rarity of the lesion on lower lip, we can emphasize the primary etiology of lower lip lesion as trauma and contributory factors being poor oral hygiene and betel quid chewing.

For the present case, scaling and root planning was completed to remove all the local irritants. The lesion was excised using scalpel under local anesthesia in aseptic conditions. Post-operative instructions were given. The patient was also advised to

Pyogenic granuloma is one of the common lesions in oral cavity. This article highlights the pyogenic granuloma on lip which is an unusual site. Although it can be diagnosed clinically, atypical presentations lead to inappropriate diagnosis. Therefore, further investigation by biopsy confirms final diagnosis upon which treatment is instituted.