Calcifying epithelial odontogenic tumor (CEOT) is a rare benign neoplasia, locally aggressive, that tends to invade bone and adjacent soft tissues. CEOT accounts for less than 1% of all odontogenic tumors. This article reports two cases of CEOT with different mode of presentation clinically, radiologically and histologically.

Calcifying epithelial odontogenic tumor (CEOT) is a rare epithelial benign odontogenic tumor that accounts for less than 1% of all odontogenic tumors. Thoma and Goldman first described CEOT as “adenoid adamantoblastoma” in 1946, but it was only acknowledged as a distinct entity by Pindborg in 1958 and in 1971 the term “ Calcifying epithelial odontogenic tumor” was generally accepted and adopted by the WHO.1, 2 It is a benign, slow-growing, locally invasive odontogenic tumor. It generally occurs in patients between 20-60 years of age, with a mean age of diagnosis of 40. It affects men and women equally.3 The most common location of the tumor is the mandibular premolar and molar region (68%) and, less frequently, the maxilla. Half of the cases are associated with an impacted tooth.4 In the following report, we discuss about two cases intraosseous CEOT affecting the posterior left mandible and posterior left maxilla.

A 50 years old male patient complained of pain and swelling in the left lower jaw for past 10 days. Patient gave history of extraction in the lower left back tooth 2 years back due to decay. History of exfoliation of lower left back tooth before 1 month. On extraoral examination of face, facial asymmetry was present due to a diffuse swelling on left middle third of face Figure 1 (A). 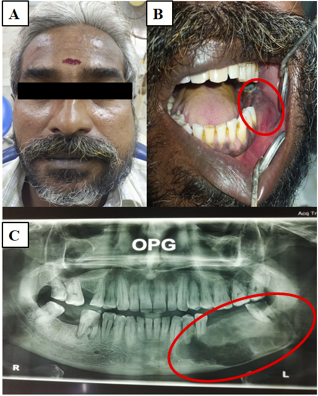 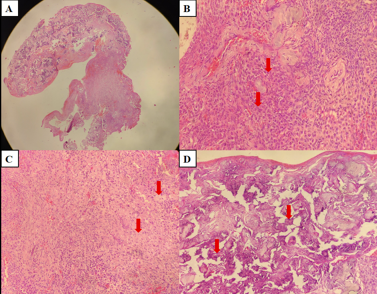 On Intra oral examination, a single diffuse swelling of size 5x3cm was present on left side mandible Figure 1 (B), extending anteriorly from mesial aspect of 34; posteriorly to distal of 38; superiorly at the level of the alveolar ridge of edentulous 36, 37; inferiorly to the depth of the vestibule. Surface was smooth with no secondary changes. On palpation the swelling was non tender, bony hard in consistency.

Orthopantomogram revealed a well defined multilocular radiolucency Figure 1 (C) extending anteriorly from the periapical region of 33; posteriorly 1 cm in front of angle of mandible; superiorly involving the edentulous area of 36,37; inferiorly to the inferior border of mandible. The borders are corticated with thinning of the inferior border of mandible. Within the radiolucent area, thick internal septae was present. Inferior alveolar canal displaced inferiorly. Evidence of root resorption in relation to 34, 35 (knife edged). Coronal portion of 38 showed radiolucency involving enamel, dentin, pulp indicating dental caries. Others structures like condyle, ramus, angle are intact. Radiographically 36,37,46,17 were missing.

Based on the site of the swelling, history of exfoliation, multilocular radiolucency, a provisional diagnosis of ameloblastoma was given. Curettage of the lesion was done.

On histopathological examination Figure 2, both soft and hard tissue was noticed. The soft tissue was made up of sheets and islands of round epithelial cells interspersed with amorphous eosinophilic material suggesting amyloid like deposits. The peripheral areas are predominantly made up of round calcified material. The epithelial cells are hyperchromatic in nature but there was no atypical mitosis. The lesion was histopathologically diagnosed as Calcifying Epithelial Odontogenic Tumour.

Subsequently, marginal mandibulectomy was done. On histopathological examination, similar histopathological findings to the incisional specimen were noticed with the presence of calcified structures, sheets of polygonal cells with hyperchromatic nuclei and no atypical mitosis. Apart from this hyalinized areas were noticed but were sparse.

A 19years old male patient complained of swelling in left side of palate. Patient gave history of incision and drainage procedure done from a private clinic for the same complaint 1 year ago. Now the swelling has relapsed which gradually increased in size to attain the present state. On extraoral examination of face, facial asymmetry was noticed with a single diffuse swelling on the left middle third of face Figure 3 (A). 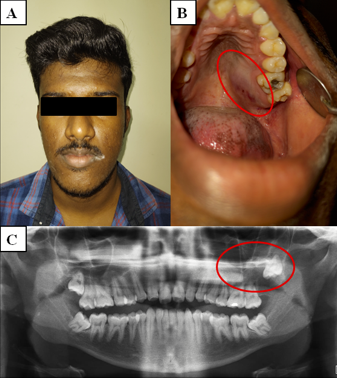 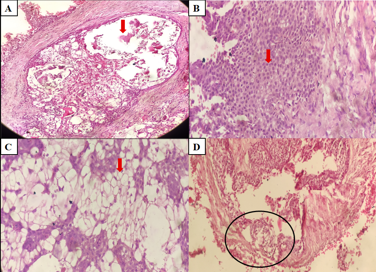 On Intra oral examination, a single diffuse swelling present in the left side of the palate adjacent to 26 and 27 Figure 3 (B). It was oval in shape and approximately 7 X 5 cm in size. The swelling was extending anteriorly from the distal side of 25 and posteriorly up to the maxillary tuberosity; medially 0.2 cm away from the midline of the face and laterally up to the palatal gingiva. The mucosa over the swelling appears to be inflamed and a sinus opening is evident with a colourless discharge. On palpation the swelling was firm to hard in consistency and was non-tender. Clinically missing 18, 28 and 38.

Orthopantomogram revealed evidence of periapical ill-defined radiolucency Figure 3 (C) extending from distal of 25 to 28 with 28 (impacted) displaced superiorly. Floor of maxillary sinus was not distinct.

Based on the site of the swelling and an associated impacted tooth, a provisional diagnosis of Dentigerous cyst was given. Curettage of the lesion was done.

On histopathological examination Figure 4, sheets and islands of odontogenic epithelium which are polygonal in shape with centrally placed hyperchromatic nucleus. Clear cells were also equally noted. There were epithelial cells infiltrating into the adjoining connective tissue and not much of mitotic figures. Granular appearance of eosinophilic areas simulating calcification was noticed. The lesion was histopathologically diagnosed as Calcifying Epithelial Odontogenic Tumour.

CEOT named “Pindborg tumor” is a rare benign neoplasm making up <1% of all odontogenic tumors.5 This tumor was also known by different names, such as ameloblastoma of unusual type with calcification, calcifying ameloblastoma, malignant odontoma, adenoid adamantoblastoma, cystic complex odontoma and as a variant of the simple ameloblastoma.6

CEOT were all associated with an unerupted tooth, Pindborg was initially of the opinion, that the CEOT was indeed of odontogenic origin, and second that the tumour develops from the reduced enamel organ of the unerupted tooth. The peripheral location strongly suggest the possibility that the tumour arises from rests of the dental lamina, or from the basal cells of the oral epithelium. In order to con-

ceptualize a unifed source of origin for the diverse locations of CEOT, dental lamina complex or its remnants was considered as source of origin. Disintegration of the complex system of dental laminae gives rise to a countless number of epithelial remnants persisting in the jaw bones and gingiva even after the completion of odontogenesis.6, 7, 8, 9, 10

The molecular biology of CEOT is not well understood. Mutation of AMBN (ameloblastin) gene and PTCH1 gene has been found in CEOT. CEOT with p53 gene mutation presented with malignant transformation and distant metastasis suggesting a potential tumor biomarker.4 Now, both the protein structure and DNA sequence of the responsible gene have been described and the protein was named provisionally as AODAM, which is encoded by exons 5-10 of the odontogenic ameloblast-associated protein (ODAM) Locus.8

CEOT is histologically characterized by three components, polyhedral epithelial cells, amyloid like deposits, and calcification. Sheets, strands or islands of epithelial cells with prominent intercellular junctions, sometimes showing variation in nuclear size and staining with the presence, in the interepithelial stroma, of amyloid-like material is seen. Due to its affinity to mineral salts, the amyloid-like material can undergo calcification, causing the concentric appearance of lamellar bodies or Liesegang rings. Amyloid-like matrix is a unique component that may be associated with tumor maturation and differentiation, and possibly lower risk of malignant transformation.3, 4, 5, 6, 7, 8, 9 Our first case represented a classical CEOT picture with sheets of epithelial cells, amyloid matrix and round calcified material.

It is widely accepted that maxillary CEOTs tend to be more aggressive and involve the surrounding vital structures than mandibular tumors.2 Variants of CEOT include clear cell, myoepithelial cell, pigmented, Langerhans cell containing, bone and cementum forming, and cystic and noncalcifying.5 1994 Hicks et al. suggested that the presence of clear cells in CEOT may be associated with more aggressive behavior.11 Anderson et al. interpreted the clear cells as representing a degenerative process, Yamaguchi et al. were of the opinion that the clear tumour cells represent a feature of cytodifferentiation rather than that of a simple degenerative phenomenon.6 Our second case represented a clear cell variant of CEOT involving the maxilla which may give us a clue of aggressiveness.

Conservative surgical resection with a margin of normal surrounding bone is the treatment of choice. The recurrence rate of this tumor has been reported to be 10%–15%. Overall prognosis seems to be good, though there is a report of malignant transformation and metastasis.5

CEOT is a benign tumour but its behavior varies depending on the histological features and location. Two cases of CEOT are presented with two different histological pictures, one with classical presentation while the other with clear cell changes which will add on to the literature of different mode of presentation clinically, radiologically and histologically.