Background: To study the association between ECC, IQ & health in Sri ganganagar, Rajasthan.

Result: A total of 300 school going children were selected from Sri ganganagar, Rajasthan of which 150 were having ECC & 150 Non ECC in the age groups of 3, 4, 5 and 6 years. Correlation between the ECC & Academic performance is stated.

Early childhood caries (ECC) is common oral health problem targeting mainly socially disadvantaged populations. Worldwide it affects infants and preschool children and has become significant health problem. The American academy of pediatric dentistry (AAPD) recognizes it as a significant public health problem. ECC has been defined as “the presence of one or more decayed (cavitated or non cavitated), missing (due to caries), or filled tooth surfaces in any primary tooth in a child seventy one month of age , any sign of smooth-surface caries is indicated as the severe early childhood caries (S-ECC).1 ECC is a severe health condition affecting children living in socially disadvantaged communities where malnutrition is a social and health disparity. ECC is associated with other health problems such as local pain, infections, abscesses, leading to difficulty in chewing, malnutrition, gastrointestinal disorders, and even difficulty in sleeping. Initially it represents as dull white or brownish spots occurring on maxillary incisors along the gingival margin and if left untreated it progresses to a complete destruction of the crown, leading to root stumps. In India prevalence of an ECC has been reported to be 44% among 8- to 48-mo-olds children. In rural southern India, the prevalence of ECC has been reported to be 40.6% among 0- to 3-y-old children, of whom 50.3% had non-cavitated surfaces and 49.7% had cavitated surfaces. Several studies have suggested the skewed distribution of socioeconomic status with ECC. The preventive strategies for the early childhood caries should begin with prenatal education of expectant parent(s),2 progress through the perinatal period, and continue with the mother and infant. Oral hygiene measures and adequate dental treatment during pregnancy can reduce or delay ECC in infants. The emphasis of health has shifted from the etiology of dental diseases affect the general health.

The participants were randomly selected from private school Sri Ganganagar city, Rajasthan. A preformed performa was given to the concerning class teachers. The children were evaluated on the basis of marked obtained in the session which were as Grade A: excellent, Grade B: good, Grade C: fair & Grade D: poor. We obtained an informed consent from the participating parents. The age group were 3-6 years. Various school camp were conducted for oral examination of children by using disposable mouth mirror and periodontal probe in natural day light. BMI was calculated by formula used :- BMI = Weight in kilogram/ Height in meter.2

We divided the study into 4 groups i.e Group I (3 years), Group II (4 years), Group III (5years), Groups IV (6 years).4 The dental examination was done in school for 3 to 6 years old children. Dentition status for caries assessment was conducted using deft index of WHO form 1997. The data was analysed by descriptive and inferential statistics. The Chi-square test was used to compare the categorical variables and the Independent t-test was used to compare between the means to determine the significant differences. Data were analyzed using the Statistical analysis software (SPSS version 25.0 Chicago IL, USA).

Depictsthe comparison of different categories of bmi with the prevalence of early childhood caries.

Depicts the comparison of academic performance with the prevalence of ecc.

Early Childhood Caries is a pathologic expression of multi factorial aetiology with a premature onset and is characterised by the presence of many deep dental caries in the primary dentition, with rapid progress into the pulpal and periodontal tissue, mostly involving the anterior teeth [Kim Seow, 1998; Wene, 1999]. The association between dental caries and growth alterations is complicated because of several variables such as biological, genetic, socio-economic, cultural, dietary factors and lifestyle behaviors [Low et al., 1999].5 Nutritional status has a profound effect on caries. Two components of nutritional status, both dietary intake and anthropometrical measurements were assessed in this study in terms of the risk of early childhood caries. The consistently habitually incorrect diet, especially the intake of sugars at night time to aid the child’s sleep is considered to be the main causative agent for the disease.6 These substances adhere to the dental surface when the salivary clearance is reduced and thus create favourable conditions for the organisation of the plaque responsible of dental caries [Bruerd et al., 1996; Danila et al., 2007].7 The present study showed a very high percentage of ECC in 4-5 yr old children with high dmft score >3. Oral health pathfinder survey of Nepal reported approximately 58% of children experienced dental caries (Yee R and Mishra P, 2006), and the high dmft may be attributed to changing dietary habits of children as frequent intake of snacks, sweet foods and soft drinks. Most of the children that visited the dental hospital required treatment of carious teeth due to which such a large percentage of children were seen as having ECC in this study. Study helped to recognise whether ECC can affect growth parameters (Height, weight) and in which direction. Results showed that there was decrease in mean weight in the ECC group as compared to the group without early childhood caries in all the four age groups from 3 to 6 years. Both males and females belonging to the ECC group also showed a decrease in mean weight as compared to the non-ECC group. This study categorised subjects as underweight, overweight.

The percentage of ECC subjects in the "underweight" subgroup was lower than in Non ECC, the percentage of EEC children in the “at risk for overweight” and “overweight” subgroups was also lower than in non ECC. These results showed that there was no significant association of ECC with BMI. This is similar to the other studies conducted globally (Edalat A, 2014; Hong L, 2008; Chen W, 1998; Dye BA, 2004; Macek MD, 2006; Shellar B, 2009; Tripathi S, 2010).8 Some studies focused how dental caries can affect growth indirectly, by altering the correct trend of auxological parameters in childhood, such as weight and height [Acs et al., 1992; Ayhan et al.9[1996].

Teachers believe that children with poor oral health and impaired smiles visually are more likely to perform poorly at school, be socially excluded and have lower

Comparison of BMI categories with ECC and Non ECC groups 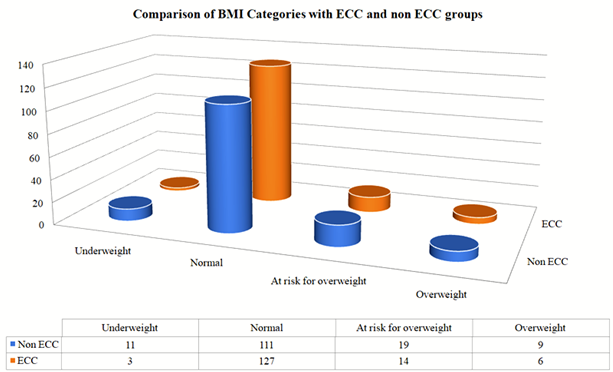 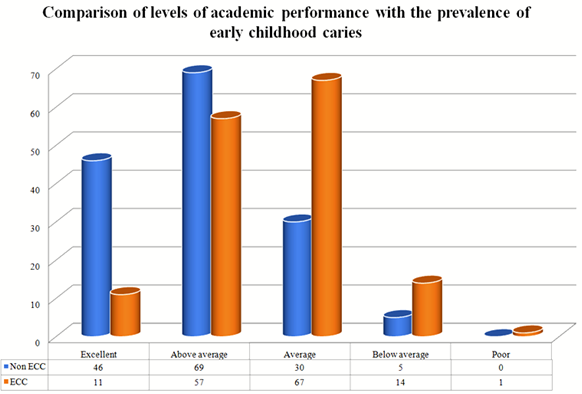 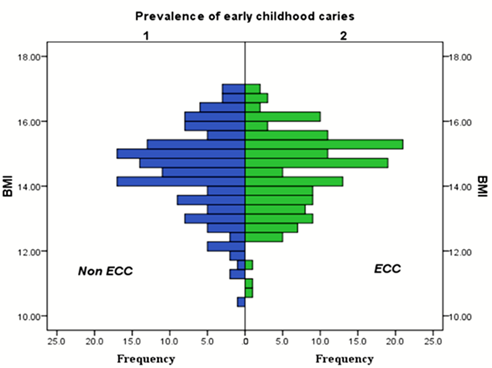 job prospects than their peers with good oral health and healthy smiles visually. The percentages of children with decayed teeth were 94 and 90% in the 6-7- and 10–11-year age groups, respectively. Families reported high levels of child consumption of sugar-containing foods and drinks; many had irregular use of fluoride toothpaste. Children with substantial plaque on their teeth achieved significantly lower levels of school performance than their peers with clean teeth. Significant associations were found between school performance and self-esteem for these children (Maharani, Adiatman, Rahardjo, Burnside, & Pine, 2017).10 Based on the risk factors of preschooler’s dental caries, their local oral hygiene and children characteristics are considered. Cross sectional study has been established based on independent variable and dependent variable in this study (H. Achmad et al., 2018).

The conducted study assessed the influence of ECC on academic performance. Children with dental disease are not healthy and this may be a disadvantage for their physiologic and mental development. Chronic illness can affect the child’s ability to succeed in school. When chronic illness causes an increase in missed school days it significantly affect their school performance adversely.11 The effect of caries related pain on distraction from learning and school performance, while not generally measured, is significant. If a child is experiencing pain from a dental problem, it may reflect in the child’s school attendance, and mental and social well-being while at school. Children with both poor oral health and general health were 2-3 times more likely to report poor school performance. Children with either poor oral health or general health were only 1.4 times more likely to report poor school performance. The consequences of high caries levels can also include a higher risk of hospitalizations and emergency dental visits, increased days with restricted activity and absence from school and a diminished ability to learn. When considering the results presented, it should be kept in mind that there are some limitations inherent to this study. The study did not control for potential confounders, such as home language and time spent in preschool education, which may affect early literacy.12 It is important that the health professionals who provide care to children know that oral health cannot be seen as separate from general health and events that take place during childhood can have an impact on adulthood, influencing the child’s future health status.13 Efforts are to be taken to encourage parents and children to promote and improve their oral health for a better educational experience.

In the end, parents and caregivers should understand the unfavourable consequences of ECC on children's quality of life; however, their attitudes against the disease seemed to be inaccurate, influenced by daily routines, doubts and beliefs.14 These findings suggests the importance of the development of participatory models of health care, regarding children's and parents’ needs to make effective health education strategies.

Early childhood caries is a chronic, infectious disease affecting young children, and presents as a serious public health problem. It is one of the most common preventable disease and is on the rise worldwide. Children with dental disease are not healthy and this may be at disadvantage for their physiologic, social, and mental development. In our present study, we conclude that BMI does not have any significant role in the prevalence of early childhood caries. However, there exists a significant association between ECC and the academic performance of children which requires further studies.

A Rosenblatt P Zarzar The prevalence of early childhood caries in 12- to 36-month-old children in Recife, BrazilASDC J Dent Child200269331943