Background: The precise outcome of any indirect casting, depends on the various procedures and materials involved through all its stages. The accurate fit against the prepared surface and the adaptation against the prepared margin depends on how accurately the tooth surface is captured in the impression made and how well it is reproduced in the die

Aim: This study aims to study and compare the property of fine detail reproduction amongst six die materials.

Materials & Methods: Over a pre-calibrated master die using custom tray, an impression record is made and poured using the six different die materials and the finest line reproduced is visualized under an optical fluorescent microscope at 50X magnification.

Statistical Analysis: The data obtained were statistically analysed using one-way ANOVA and subsequently assessed by post-hoc Tukey’s comparison to identify any significant differences between the groups.

The 20th Century entailed the development and widespread evolution of Taggart’s ‘Lost-wax’ technique or more generically termed as the indirect casting procedure. The precision of castings procured through the indirect casting technique, lay its reliability on the various intermediary procedures and methodologies employed. The pattern of the prosthesis, thus fabricated, must anatomically and functionally simulate the structure being replaced.1 Dies represent the prepared tooth structure over which the pattern is prepared and sculpted. Ideally, materials used to pour dies from the impressions of prepared tooth surfaces, must conform to certain requirements such as abrasion resistance, certain refractoriness, dimensional stability, adequate surface detail reproduction, transverse strength, to name a few.2

The more commonly used die materials are, Type IV and V gypsum products, epoxy resin dies and electroplated dies. Type IV gypsum products are an easily available, economically viable option, and are compatible with most impression materials.3 They bear the disadvantage of poor abrasion resistance to stresses of laboratory manipulation for which hardeners and modifiers when added, may alter the dimensional accuracy of the same.3, 4 Epoxy resin dies exhibit excellent surface detail reproduction and abrasion resistance, but display dimensional variations in axial directions.3, 4, 5

Fine detail reproduction ensures accurate simulated representation of the prepared tooth structure in the laboratory set-up.6 It provides for a foundation that most closely resembles the tooth over which the restoration accurately adapts. This study aims to compare and evaluate the property of fine detail reproduction of 6 different die materials, namely epoxy resin, synthetic gypsum, resin modified Type IV and Type V gypsum; and conventional type IV and type V gypsum products.

Die materials tested in this study.

The materials to be tested were grouped (depicted in Table 1) with each having 10 representative samples to study, making it a total of 60 samples. The following groups of materials (Figure 2) were used to prepare the samples for the study-

Auto-polymerizing acrylic resin (DPI, India) was used to fabricate the custom trays. A 7-part stainless steel master mold (Figure 3) was fabricated to construct custom trays of uniform dimensions. The master mold was fabricated in such a way that trays made from it had a uniform 2 mm of resin thickness as well as a uniform 2 mm space for the impression material. Monomer and polymer in a ratio of 2.4: 7 (by volume) were mixed in a ceramic bowl and carefully poured over the mold covered by petroleum jelly lubricant, so as to avoid air entrapment and allow retrieval of the tray. After 30 minutes, the components of the mold were separated to obtain the resin custom tray. The mold was cleaned of any remaining resin material and lubricated before pouring another mix of resin for the next custom tray. Once the tray was obtained, any excess resin flash was removed and escape holes were made. Six escape holes were made in the tray to allow excess impression material to flow out. All holes were made equidistant from the edges of the resin tray; two along the length of the tray and one along its width. The trays were then stored for 2 weeks to allow the dimensions to stabilize.

The materials were proportioned according to the manufacturer’s specifications.

For all gypsum-based products, distilled water was measured in a graduated cylinder and poured into a bowl that had just been rinsed with distilled water. The appropriate quantity (50g) of powder was weighed (A&D electronic analytical balance, ER — 180A, Least Count 0.0001g, A&D Company Ltd, Tokyo, Japan) and sifted into the bowl of water and hand mixed for 60 seconds. The impressions were then carefully poured under vibration, using a mechanical vibrator (Unident Industries India, India). All the samples of the gypsum-based products were separated from the impressions 30 minutes after they were poured. The free surface of the specimens was ground flat and parallel to the opposite impression surface and finished up to 1000 grit SC paper (Silicon Carbide paper, John Oakley & Mohan, India).

Epoxy resin and resin hardener were drawn up to the third marking in each of their respective syringes. Both materials were syringed into a clean disposable plastic cup and mixed for 60 seconds with a clean, disposable wooden spatula provided by the manufacturer for this purpose.

After 24 hours, each of the 60 samples were examined under the stereo zoom microscope (Leica, MZ 12) with an image analysing software at 15X resolution with low angle lighting. The number of lines that were discernible on the reproduced dies (Figure 4) were counted. At least 90% of the groove had to be replicated to count it as being present. The interpretation was made, based on the dimension of the narrowest line, thus counted. 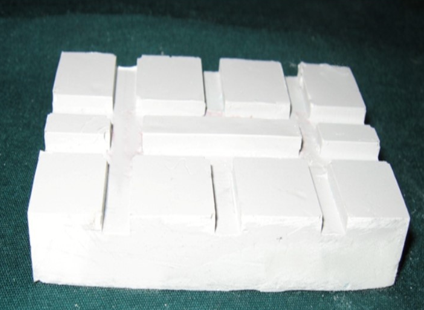 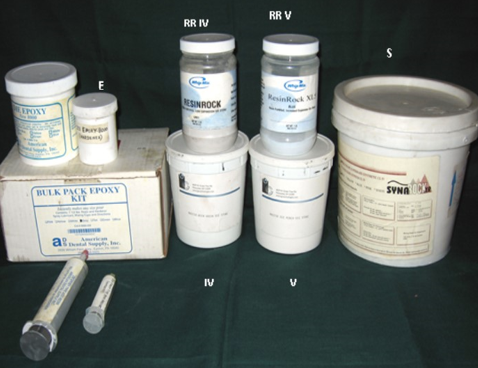 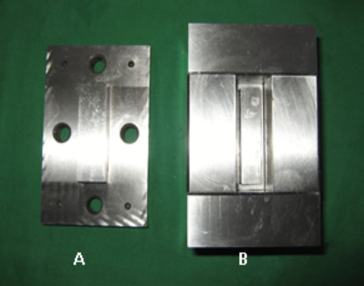 Photograph showing the A – the schematic diagram of the die, B – the replicated lines on a test specimen as viewed under a stereomicroscope 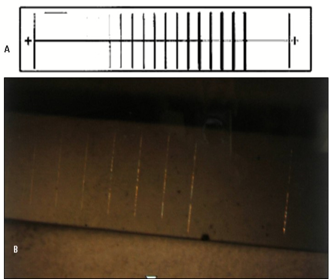 Graphical representation of number of lines reproduced by the six groups of die materials in the test of fine detail reproduction. The same alphabets indicate values that, there is no statistically significant difference between groups. 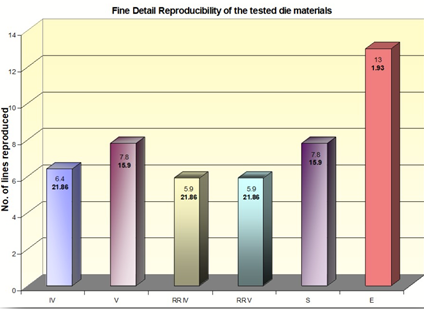 One of the factors determining the accuracy of a restoration fabricated using the indirect technique, is the fine detail reproduction of the die over which its pattern is carved.7 Hence, the fit and functional success of a cast dental restoration depends on how well the die reproduces details as fine as the finish line and contours of the prepared tooth.8 A die with precise reproducibility has potential to develop a margin for the restoration that lies in more intimate contact with the finish line of the prepared tooth.

Previous studies have validated the methodology employed to study detailed reproduction of surfaces using various other die materials. Toreskog et al, employed Knoop indentations that ranged from 1 - 14mm in depth and 32mm — 422mm in length to measure the ability of different die materials to replicate fine detail.14 Derrien et al., used grooves ranging from 1mm - 46mm to test for fine detail reproduction. They also employed scanning electron microscopy (SEM) and 2-dimensional profilometry as a means of evaluating the details reproduced by the different die materials.15 The tracings obtained for the gypsum material (type IV) were irregular and could only be interpreted when the groove depth became approximately 15mm. The deepest grooves were also found to have not been replicated in their entirety. The tracings for the epoxy material on the other hand showed a suitable reproduction of all grooves including the minute ones and were comparable to the calibration model.15 Duke et al., used grooves of the order of 1mm — 56mm to evaluate fine detail reproduction using an optical microscope with reference to a master die the technique and methodology of which was very similar to that formulated for this study.16

In this study, the results generated were consistent with the previous studies proving the exceptional surface reproducibility of epoxy resin dies.17, 18 The epoxy resin dies not only duplicated the narrowest groove (1.93µm) with adequate precision but also consistently did so amongst all its samples. Parallelly, the lines were also easy to visualize under the microscope. Scanning electron microscopic studies have proven the low porosity range and surface reproduction of up to 2 µm for epoxy resin dies.15 The size and irregularities of the gypsum crystals preclude gypsum- based products from capturing details at the level that epoxy resin die materials are capable of reproducing,3, 4, 5, 6, 7, 8, 9, 10, 11, 12, 13, 14, 15 Photomicrographic studies of conventional Type IV die stones have shown that the hemihydrate powder (without water) consisted of angular irregularly shaped fragmented particles that ranged in size from 1 – 25 mm. As the reaction with water proceeds, these hemihydrate crystals result in the nucleation of numerous particles less than 1 mm in size. These particles continue to grow in size as the reaction advances. The original particles almost completely disappear by 60 minutes and the growing dihydrate crystals interdigitate with one another in the form of a mesh.19, 20 The scanning electron microscopic examination of set gypsum revealed entanglement of gypsum crystals measuring 15mm — 25mm in length which also explains why it is difficult to achieve detail reproduction finer than 20mm with the gypsum-based materials.18 The optical properties of these materials are another important factor to consider. Unlike the epoxy resin die material tested, the gypsum-based materials scattered light and required low-angle illumination to see details.

Attempts have been made towards achieving better mechanical and surface properties of die materials. Over the recent years, gypsum die stones have been compounded with resins to provide better abrasion resistance and lower expansion values.3, 4, 5, 6, 7, 8, 9, 10, 11, 12, 13, 14, 15, 16, 17, 18, 19, 20, 21, 22 In this study, the resin modified gypsum products displayed surface detail reproduction of up to 21.86 µm which lies well within the acceptable range as prescribed by the American Dental Association Specification No.25 and ISO 14233:2003(E) for polymer-based die materials.23, 24 This, more or less, proves the inability of resin compounded gypsum products to improve in the aspect of fine detail reproduction since they were as precise as Type IV gypsum alone.

Within the limitations of this study, the following conclusion can be drawn. Epoxy resin dies continue to reign amongst the materials studied, with the most accurate and precise reproduction of fine surface details. The epoxy resin material consistently replicated the 1.93 mm line in all the test samples. The lines were also easier to visualise. The resin-based gypsum materials and type IV gypsum replicated with the least detail among all the tested materials (21.86mm) while conventional Type V and synthetic gypsum showed intermediate reproducibility with replication of the 15.91 mm line.