The lingual versus labial biomechanics – A case report

Lingual orthodontics have stormed the world of orthodontics over the past few years with its esthetic superiority. But apart from its invisibility, this technique has very significant superiority in non extraction line of treatment where space is a requirement. This article is aimed at describing a case report of a 12-year-old girl who with almost 180 degree rotated upper left central incisor with its palatal surface facing labially. With the lingual technique the derotation of rotated incisor was completed. The incisors maintained the axial inclination without disturbing the profile. This proves that apart from the esthetic superiority, the lingual technique has the greatest advantage of its biomechanics in preventing unwanted proclination of anteriors, thus serving as the ultimate choice of treatment in non- extraction treatment.

Non extraction philosophy is an erstwhile treatment modality that has been popular ever since the Angle days. One of the significant aspects in this line of treatment is the creation of space. Some of the common methods for space gaining in non extraction method of treatment includes expansion, inter proximal stripping etc. However, in any non extraction method involving labial orthodontics, a small percentage of proclination of anterior teeth is bound to occur. Whatever the measures taken to prevent this unwanted labial flaring, it cannot be totally avoided. Various methods like passive lacebacks, cinching of distal ends and predominant usage of round wires have been suggested by various authors. Though these remedies are useful to some extent, they are not absolutely fail proof in regard to labial movement of anterior teeth.

Biomechanically, specifically, this occurs since the point of application of force on the labial surface is much ahead of the point of center of resistance of the tooth in the antero - posterior dimension. Therefore, the only alternative to prevent this undesirable labial movement is to relocate the point of force application from labial to lingual/ palatal.

In labial orthodontic technique, when a wire is engaged to the labial bracket, since the point of force application is far labial to the center of resistance, there is a tendency for the tooth to move labially. Similarly, in lingual orthodontics, when wire is engaged to the lingual bracket, since the bracket is more closer to center of resistance, the tendency for proclination is much less. In fact, loosing torque in extraction cases is a common problem in the lingual technique while this is the biggest advantage to non- extraction line of treatment.

A 12-year-old patient with a mild convex profile, incompetent lips, on intraoral examination exhibited an Angle’s Class I molar relation with an almost 180◦ rotation of 21 with its palatal surface facing labially, reported for orthodontic treatment. (Figure 1) 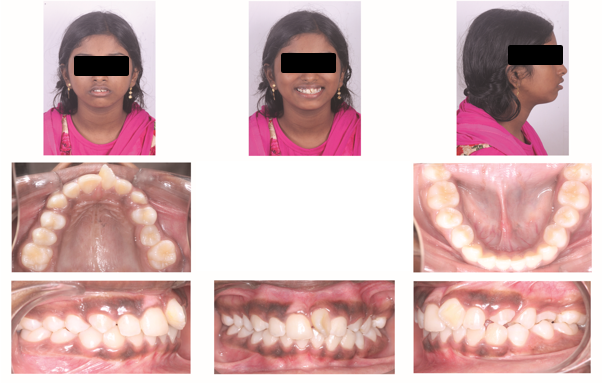 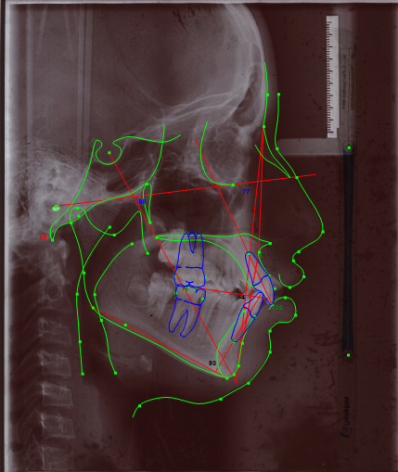 Various treatment modalities were discussed to create space for the severely rotated central incisor (21). Finally, a non – extraction approach with inter proximal enamel reduction was the treatment of choice. Considering the mild convexity of the profile and the incompetence of lips, it was deemed that no labial movement of the incisors should occur. Hence, it was decided to treat the patient with the lingual technique.

The various steps in lingual customization of brackets using DAS device was as follows:

The procedure of surveying was carried out on the study models. Surveying involves marking the long axis of all teeth labially and lingually and determining the depth and height at which the brackets are to be positioned using the jigs. (Figure 3)

After surveying, the process of barricading was done on the labial surface to provide a guide for the jigs to position the previously surveyed bracket using light cured soft acrylic (Barricaid Visible light cure periodontal dressing, Dentsply) (Figure 4). Indirect bonding trays were then made with Essix vaccum formed sheets.

The required space was achieved by the derotation of the severely rotated 25 and partly by arch expansion. Additionally, interproximal stripping was performed to gain extra space.

After indirect bonding, blue bite was placed on the occlusal surface of the lower arch to gag the bite to avoid interocclusal interference in upper arch. (Figure 5) 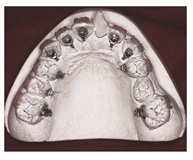 After initial aligning with mushroom arch form 0.014 and 0.016 Niti archwires, a Niti open coil spring was inserted on an 0.016 stainless steel arch wire in relation to 21. Once sufficient space was achieved, derotation of the severely rotated central incisor was carried out on an 0.018 stainless steel arch wire with offsets for 21. Further, alignment and levelling was performed with Niti archwires.

The lower arch was strapped up with labial ceramic brackets and finished in a non extraction approach with routine mechanics (Figure 6). On completion of treatment, an upper permanent lingual retainer was placed in addition to upper and lower thermoplastic retainers.

Post treatment results exhibited correction of the severely rotated 21 and the upper incisors maintained their inclination in an antero-posterior direction without disturbing the profile of the patient. The overjet was reduced from 4mm to 2mm (Figure 7). Cephalometrically, the angular measurement of upper incisor to NA line decreased from 23.5◦ in the pre treatment to 22◦ post treatment. The post treatment radiographs demonstrate absolutely no signs of root resorption (Figure 8). 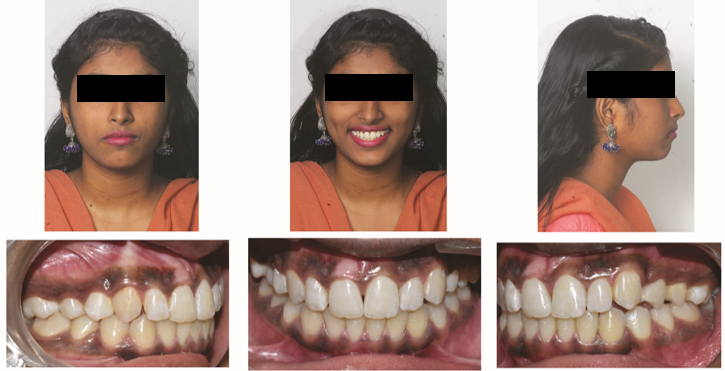 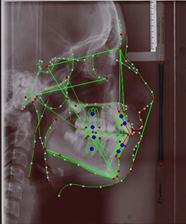 The lingual technique is always known for its superiority in esthetics when compared to the labial technique in fixed orthodontic therapy. In the present day even with the advent of various other appliances like clear aligners, the lingual technique is still considered a more efficient esthetic modality, especially with the advent of the customised brackets which are fabricated with computer aided design (CAD).2 The complexity of practicing the technique has reduced to a large extent due to the state of art technologies used in the lingual appliance labs. With the availability of lingual bonding trays for indirect bonding and robot assisted lingual arch forms, this technique has been almost just as simple as the labial technique presently.

Inspite of the lingual technique having a great disadvantage of loosing torque in extraction line of treatment,3 it has the distinguished advantage of not flaring the incisors labially in non extraction treatment. This occurs because of the relationship of centre of resistance of tooth with the point of force application. In the labial technique, the point of force application is far labial to the centre of resistance and thus the tooth has a tendency to move labially, while in the lingual technique, the point of force application is more closer to the centre of resistance of the tooth, thus preventing untoward labial movement.4 For this reason, in this case report it was possible to maintain the inclination of the upper incisors efficiently. Had this case been treated with routine labial orthodontics, the chances of labial flaring and worsening of the profile would have been extremely high.

Apart from the esthetic point of view, the lingual technique has the greatest advantage of its biomechanics in preventing unwanted proclination of anteriors, thus serving as the ultimate choice of treatment in non- extraction treatment.

The author declares no conflict of interest.