Trauma has a lasting effect on both physical as well as mental well-being of an individual. Traumatic dental injury can be distressing for anyone right from a pre-schooler to a teenager to an adult. Hence it’s imperative to restore the affected teeth to reinstate not only the lost confidence but also the lost aesthetics and functionality. This report showcases an intricate case of a 12-year-old male, where uncomplicated crown fracture was associated with extrusive luxation injury in a tooth with open apex which became devitalized and was managed by splinting followed by apexification. Management of even such cases with guarded prognosis can be done conservatively to ensure functional as well as aesthetic rehabilitation. Restoring the tooth to function will help the patient regain his lost confidence. Hence, there cannot be a cookbook approach to manage dental traumatic injuries as many times fractures and luxation injuries occur concurrently.

Traumatic dental injury has a long-term impact on the mind of a patient irrespective of their age. Management of the same depends on a multitude of factors like patient dependent factors, injury-related factors, factors related to how a patient is managed before reaching a dental clinic etc. To elaborate on a few of them

According to Andreasen traumatic dental injuries can be classified in two broad categories i.e., fracture and luxation injuries as follows: 1

Age group ranging from 6 to 12 years old comprising of school-going children and young adults are most affected by dental traumatic injuries. Dental traumatic injuries constitute 5% of all the injuries for which patients demand treatment.2, 3 25% of school children and 33% of adults have experienced trauma to permanent dentition with a preponderance for their occurrence before age of 19 years according to Glendor U.4 While the permanent dentition is affected more by crown fractures, primary dentition is affected more by luxation injuries.1

Traumatic dental injury can be managed by :

Depending on the extent of damage to pulpal-periodontal architecture, stage of root maturation, and delay in treatment: apexogensis, apexification, revascularisation of pulp is carried out.5 This case is a congregation of several findings like uncomplicated crown fracture of traumatised teeth, luxation injury leading to grade III mobility of tooth which had incompletely formed apex and gross devastation of periodontal architecture of the same tooth. Aim of the treatment in this case was to restore aesthetics as well as function i.e., speech, mastication, health of adjoining tissues at the same time.

A 12-year-old male reported to the Department of Conservative Dentistry and Endodontics with the chief complaint of swelling and pain with respect to upper front teeth region. Patient gave a history of a fall on the ground while playing at school 48 hours ago. No history of loss of consciousness, ENT bleeding, seizures and vomiting. He gave a history of mild bleeding from the mouth. Patient was given primary treatment including intra-oral pack and injection tetanus toxoid in the nearby hospital as reported by parents. Patient had no relevant medical history. Clinical examination showed uncomplicated crown fracture in #11, #21 and a luxation injury along with an intra-oral swelling with respect to #21 as seen in Figure 1 (A). According to Miller’s scale, #21 was Grade III mobile and #11 was Grade I mobile. #11, #21 were severely tender on percussion. Fremitus test was negative. There was pain and disturbance in occlusion due to severe mobility in #21. Intra-oral Periapical Radiographic (IOPA) examination showed periodontal ligament (PDL) space widening in #11, a pronounced mesial radiolucency around the root of #21 suggestive of severe damage to periodontal architecture and incompletely formed apex in #21 as seen in Figure 2 (A). Pulp Sensibility testing (Both thermal and Electric Pulp Testing) revealed delayed response initially, negative response after 10 days in #21, and positive response in #11. Diagnosis made was Ellis class II fracture in #11 and Ellis class II fracture with extrusive luxation in #21.

Conservative treatment was planned including semi-rigid splinting and apexification in #21 and final restoration with composite resin in #21, #11. The same was performed after taking written assent. Oral prophylaxis was performed and the patient was advised warm saline mouth rinses and soft diet. The same day #21 was gently repositioned and semi-rigid splinting was done with reinforced glass fibre (everStick NET, GC Corporation, Tokyo, Japan) followed by a layer of composite resin (G- aenial Anterior, GC Corporation, Tokyo, Japan) extending from #13 to #23 as shown in Figure 1 (B). A thin layer of glass ionomer cement (GC Fuji II LC, GC Corporation, Tokyo, Japan) was applied on the coronal surface of exposed dentine in #11 and #21. Clinically there was a reduction in tooth mobility after 10 days of splinting. As #21 responded negatively to pulp sensibility testing the second time, local anesthesia was administered and root canal treatment was initiated in #21. After confirming working length radiographically, bio-mechanical preparation was done with apical preparation up to #50 K file (K file, Mani Inc, Japan) as shown in Figure 2(B). 3% sodium hypochlorite (Hyposol Prevest Denpro Ltd, Jammu, India) was used for intermittent irrigation followed by final flushing with EDTA (Prevest Denpro Ltd, Jammu, India) to remove the smear layer. Calcium hydroxide-iodoform dressing (Metapex, Meta Biomed) was used as an intra-canal medicament and its placement in the canal was confirmed radiographically. Clinical and radiographic follow up was done at 2 weeks, then at 4 weeks which showed significant healing of the periodontal architecture and no mobility of #11, #21. Splint removal was done after 4 weeks.

Clinical and radiographic examination at end of 3 months showed completion of root end formation in #21 and positive response to pulp sensitivity testing in #11. Root canal was disinfected under rubber dam in #21, master cone radiograph was taken as shown in Figure 2 (C) and obturation was done using gutta-percha cones (De Trey Dentsply, Konstanz, Germany) and AH Plus sealer (De Trey Dentsply, Konstanz, Germany) which is an epoxy resin-based sealer as shown in Figure 2 (D). AH Plus sealer is a biocompatible sealer, does not stain the tooth, excellent radio opacity hence is the material of choice. Composite restoration (G-aenial Anterior, GC Corporation, Tokyo, Japan) was done using layering technique in #21, #11 in the subsequent visit as the final restoration as shown in Figure 1 (C). The patient was kept on constant follow-up at 6 months and one year subsequently as shown in Figure 2 (E).

(A): Pre-operative photograph showing uncomplicated crown fracture in #11, #21 and marginal gingival swelling with respect to # 21;(B): Photograph demonstrating the semi-rigid splinting done with reinforced glass fibre followed by composite resin extending from #13 to #23; (C): Post -operative photograph demonstrating the restoration done with composite resin in #11, #21 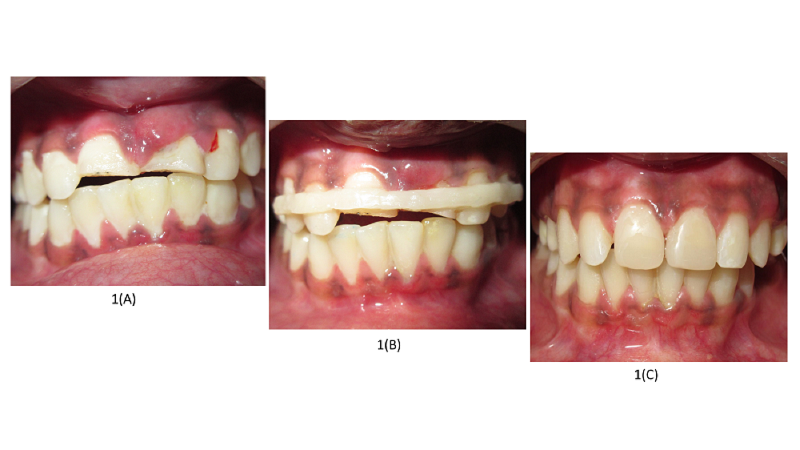 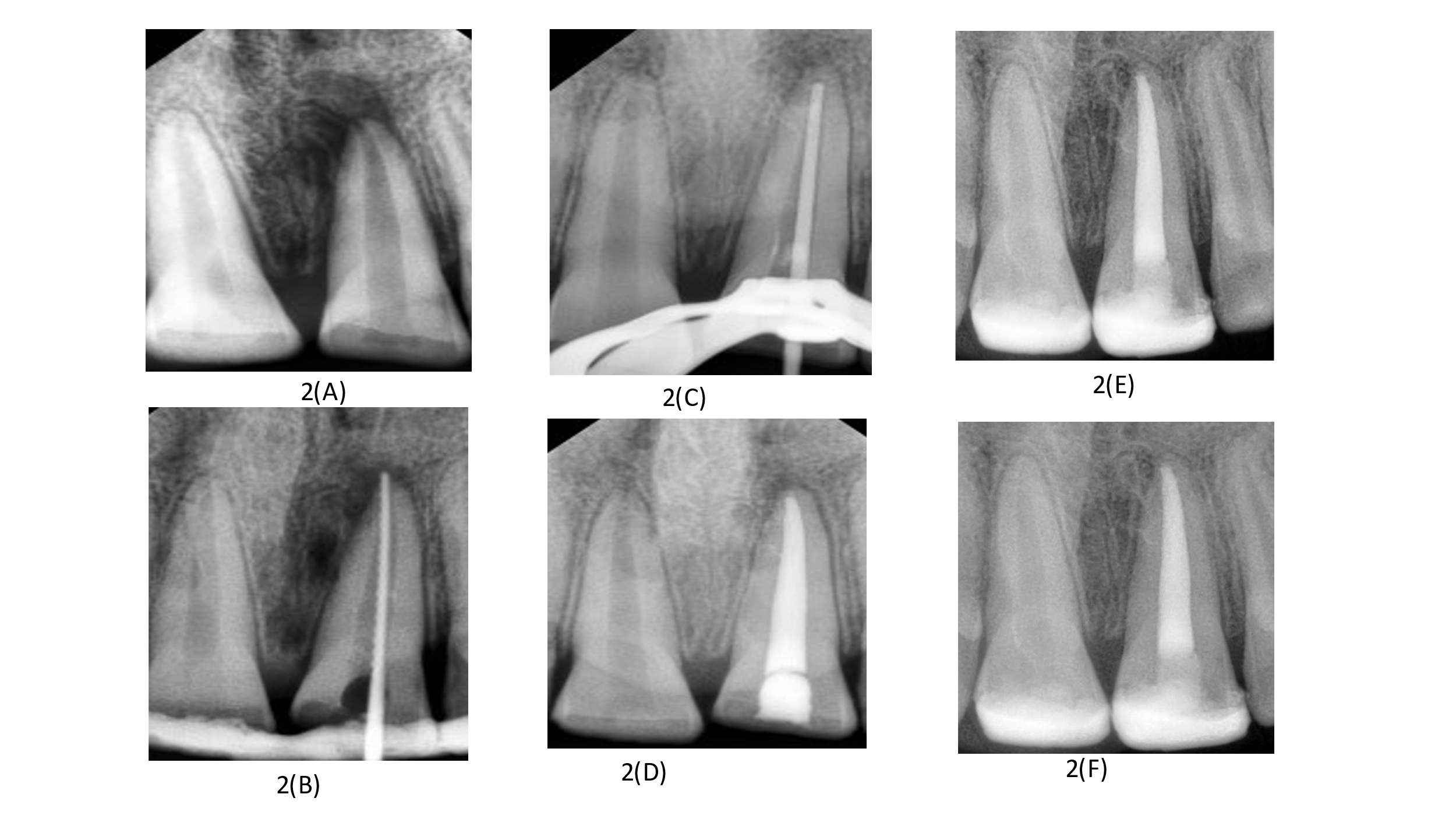 Maxilla is rigid as it is fixed to the skull, thus it has a higher predilection for traumatic dental injuries compared to the mandible which is mobile and it can resist the forces better.6

There is highest incidence of traumatic dental injuries reported in maxillary incisors (60.82%) out of which most commonly affected is maxillary central incisor (45.41%). This can be attributed to the greater proclination of maxillary incisors compared to the mandibular incisors and are the first ones to be exposed to any kind of impact.6, 7, 8 Prevalence of luxation injuries ranges from 15-61% and 62-72% in permanent and primary dentition respectively.2 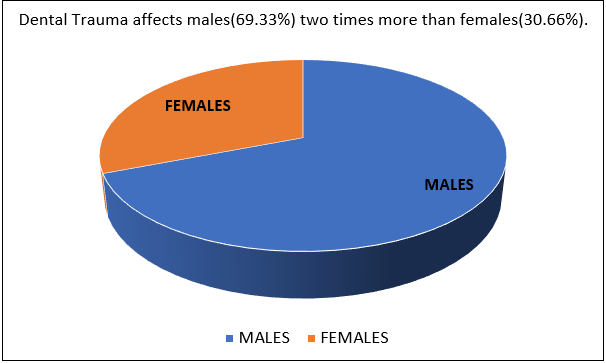 Traumatic dental injury has a lasting impact on the minds of adolescents especially if the anterior teeth are involved. Any impact on anterior teeth makes an individual feel embarrassed about the dental appearance which can be noted in his altered social interactions.9 An individual deprived of a good smile and oral health has low self-confidence leading to the inability to learn and grow in the personal and professional sphere.10 According to The United Nations individuals aged between 10–19 years i.e., those in the second decade of their lives are grouped as adolescents. Traumatic dental injury commonly affecting adolescents is uncomplicated crown fracture of anterior teeth.11

Extrusive luxation can be managed by immediate repositioning followed by splinting with a flexible splint for 2-3 weeks.12 If accurate repositioning is not possible orthodontic forces need to be applied to reposition the tooth apically. Cases of severe luxation where the tooth is extremely mobile, extraction of the concerned tooth is done followed by its replacement by RPD, FPD, implant-supported prosthesis or intentional replantation which is the last resort.13

This case demonstrates the treatment modality adopted for a 12-year-old male who presented with crown fracture and extrusive luxation in a tooth with incompletely formed apex. This case shows that, #21 which was grade III mobile was repositioned gently and stabilised with reinforced glass fibre followed by composite resin splint. Fiber splints are generally made of polyethylene fibres, pre-impregnated glass fibre, Kevlar mesh. Fiber splints are preferred due to numerous advantages like enhanced stabilization of displaced teeth, aesthetically acceptable, well tolerated by the gingival tissues, facilitates ease of maintenance of oral hygiene, does not interfere with pulp sensibility testing and endodontic procedures. The use of rigid splint and splinting for long periods has been associated with root resorption, ankylosis.14 Semi-rigid and flexible splint is favoured over rigid splint according to IADT.14, 15

The position of #21 was verified radiographically. Clinical, radiographic evaluation was done at a regular interval of 2 weeks, 4 weeks, 3 months, 6 months, and one year. Splint removal was done after 4 weeks. According to IADT (International Association of Dental Traumatology) guidelines duration of splinting is 2 weeks but in case of marginal bone injury, it can be extended for an additional 3-4 weeks.15 Pulp Sensibility testing denoted a negative response even after 10 days of trauma suggestive of loss of pulp vitality in #21. Hence apexification was planned in #21 as its apex was not completely formed using calcium hydroxide as an intra-canal medicament.

According to Rafter M, apexification is a procedure employed to create an apical barrier to contain the root canal filling material in an immature tooth with non-vital pulp.16 The speed of apical barrier formation is affected by age of the patient, apical width, type of injury, presence of an abscess.17 Literature reports that the following materials have been used to stimulate apexification like Calcium hydroxide, MTA, Tricalcium phosphate, collagen calcium phosphate, osteogenic protein-1, bone growth factors.18 Though recently MTA is being used instead of calcium hydroxide but it comes with added concerns like prolonged setting time, difficult handling, difficult to do re-treatment once it sets, tooth discoloration, and its high cost.19 Calcium hydroxide is a time-tested and broadly accepted material for apexification due to its high alkalinity (ph: 12.5 -12.8), bactericidal activity, ability to stimulate granulation tissue cells in root canal apex to form mineralized and fibrous tissue.20, 21

Considering all the factors, calcium hydroxide was used for apexification in this case. The average time taken for apical barrier formation ranges approximately from 3 to 17 months.22 Clinical as well radiographic examination after 3 months showed the complete formation of an apical barrier as well as a healed periodontal apparatus. So the obturation was done after 3 months, completing the root canal treatment. It was followed by the final restoration of the teeth with composite resin using the layering technique instead of the crown because of the young and growing age of the patient.

This case thus demonstrates that how conservative treatment can be adopted even in complex cases wherein dental trauma may lead to extreme mobility of tooth due to disturbance of periodontal apparatus leading to loss of vitality of a tooth with immature apex accompanied with an uncomplicated crown fracture. Conservative treatment like splinting tooth in position followed by apexification aimed to preserve the tooth and restore its aesthetic as well as function which indirectly instilled self-esteem and confidence in the adolescent.

CMM Silveira CCN Sebrão LSR Vilanova A Sánchez-Ayala Apexification of an Immature Permanent Incisor with the Use of Calcium Hydroxide: 16-Year Follow-Up of a CaseCase Rep Dent201520151610.1155/2015/984590