The biggest task for a paediatric dentist is the restoration in a young child who has severely damaged anterior teeth and suffered from multiple tooth loss due to severe early childhood caries. Early loss of anterior teeth has a major effect on the psychology and behaviour of children. The aim of this paper is to describe the rehabilitation of deciduous anterior teeth with a fixed, aesthetic and functional appliance (modified Groper's Appliance). Such appliances are considered to be elective and their placement is normally at the demand of parents.

The aesthetic recovery in the preschoolar who has experienced numerous tooth loss due to rampant early childhood caries (ECC) or serious dental trauma is the biggest obstracle for the dentist.1 Early tooth loss has a profound impact on general oral health of a child even after eruption of permanent teeth, which often leads to undesirable tooth movements of primary or permanent teeth including loss of arch length.2

Untimely loss of maxillary incisors due to caries is very common in young children.2 ECC, previously known as baby bottle caries, nursing bottle caries, baby bottle tooth decay, or nursing decay, is comparatively recent term for infants and preschoolar that describes rampant dental caries.1 The extent of decay of the teeth in ECC is usually so severe that most of the anterior crowns are decayed or lost by the time the child is brought to the dentist.1 Esthetic and functional rehabilitation of pre-schoolers with ECC is the biggest challenge for paediatric dentists. 2

Anterior teeth loss in children has a wide-ranging effect on the child's psyche. It is very important to restore all functions such as mastication, speech, abnormal oral habits including the aesthetics of the child, when these teeth are lost by replacement and prosthetic management. The substitute should be such that it should not intervene with the underlying successor's eruption process. There are various aesthetic alternatives available, including removable or fixed partial dentures.3

A four-year-old boy reported to the Department of Pediatric and Preventive Dentistry with a complaint of decayed upper front teeth. On clinical and radiographic examination, root stump was present i.r.t 51,52, 61 and 62 (Figure 1, Figure 3), carious with pulpal involvement was noticed with 74 and 84 (Figure 2). Smooth surface caries was present with 53, 54, 63, 64, 71 and 72. Fusion with smooth surface caries was noticed with 81, 82 (Figure 1, Figure 2). Occlusal pit caries was present with 55, 64 and 65. Thus, a diagnosis of severe early childhood caries (S-ECC) was made. Based on the clinical and radiographic findings, the following treatment plan was made. Pulpectomy of 74 and 84 followed by Stainless steel crown. GIC restoration with 55,64 and 65. Extraction of 51, 52, 61 and 62 followed by fixed functional space maintainer. 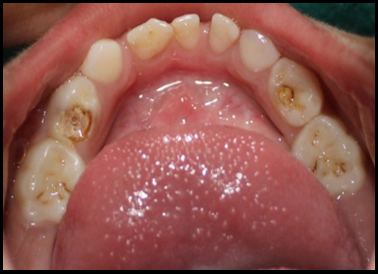 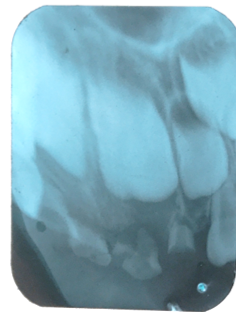 Metal trial of appliance with 4 brackets in anterior region 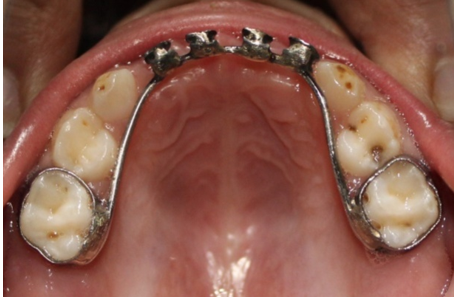 Postoperative photograph after the placement of appliance 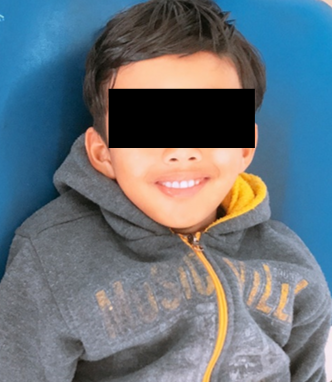 Before fabrication of appliance; 51, 52, 61, 62 were extracted and pulpectomy was performed with 84 and 74. Bands were adapted on 55 and 65 and alginate impressions were made for the upper and lower arches. On the upper cast, a stainless steel wire (0.9 mm) framework was made, spanning from one band to the other. The ends of the wire are then soldered to the corresponding molar bands. In the anterior region 4 brackets were soldered and was tried in patient’s mouth for fitting (Figure 4). After trial acrylic teeth were trimmed and occlusion was checked using lower cast. Using Transbond light cure adhesive (Koden, Newington, USA), teeth were bonded to the brackets and cold cure acrylic was used to increase the anchorage between teeth and acrylic.Glass ionomer luting cement was used for cementation of molar bands on 55 and 65, after appropriate trimming and polishing (Figure 5, Figure 6).

The aesthetic restoration of anterior deciduous teeth has a vital psychological influence on the self-esteem of the patient. The permanent successors may be proclined after early loss of deciduous maxillary anterior teeth and therefore the arch length or perimeter is increased.6 Inappropriate speech may result in absence of maxillary anterior teeth, the lingual sides of which are required by the tongue for certain phonations. Usually, itaffects sounds such as ‘s’, ‘z’ and ‘th.5

A research by Riekman and Badrawy (1993) stated that speech difficulties resulted in the loss of deciduous anterior teeth before the age of 3 years. The motives for replacing missing anteriors are to restore an esthetic appearance and facilitate the child's normal psychological development.5

When taking into account all the variables, if parents inclines to replace the missing anterior teeth of their child, their wish should not be discouraged.

To build strength instead of bonding, banding of molars was carried out. In a case, Bhasin et al. used a bonded space maintainer to preserve the space in the primary molar region. It is necessary to choose the material that is cost-effective and will be able to function before the permanent teeth erupt without interfering with the normal eruption process.6, 7

In the present case, it was plan for minimum amount of palatal coverage causing no or minimum irritation. Aesthetic space maintainer has been found to have a much broader acceptability and compliance by paediatric dental patients to wear the appliance. This is also a solution to paediatric edentulous anterior arches with compromised speech, esthetics and behaviour of the patient including poor social acceptance. Thus in this case, it was plan to use fixed functional space maintainer for aesthetic and functional replacement of 51, 52, 61, and 62.

Early childhood caries of an anterior tooth can result in psychological distress to the child at a younger age. With this appliance, the restoration of anterior esthetics gave the child and his parents an important psychological boost. In addition to improving facial asthetics, it acts as a functional space maintainer, helping to establish proper speech; preventing any untoward oral habits from emerging, thereby helping the child's sound development during the foundation years.

WF Waggoner A Kupietzky Anterior esthetic fixed appliances for the preschooler: considerations and a technique for placementPediatr Dent200123214750