Aeran, Sharma, and Tuli: Biodentine: Material of choice for apexification

Biodentine: Material of choice for apexification

Pulp necrosis with incomplete root formation in permanent teeth leads to open apex of the particular tooth which leads to the formation of the periapical pathology. The management of such cases poses a great endodontic challenge. Apexification is the process of induction of calcific barrier across the open apex or the continued apical development in an immature tooth with infected necrotic pulp. The aim of this case report is to share a successful apexification of maxillary central incisors with by using Biodentine without complications.

Result: Biodentine is a material of choice for single visit apexification.

The root development is a natural process and closure of the root apex occurs up to three years following eruption of the tooth. During this process if any kind of trauma occur to the tooth, it may hinders the process of root apex closure. Due to which, the root canal is wide, with thin and fragile walls, and the apex remains open.1 This leads to impair root canal instrumentation and prevent the achievement of an adequate apical stop. In order to allow condensation of the filling material and to promote apical sealing in such cases, it is imperative to create an artificial apical barrier or induce closure of the apical foramen with calcified tissue.2

Apexification could be viable option for management of immature permanent teeth with open apices. It is a method to induce a calcified barrier in a root with an open apeices.3

Biodentine™ is a new calcium silicate based cement. In 2009 Biodentine (Septodont, St Maur des Fosses, France) was introduced as a tricalcium silicate cementum. Biodentine is supplied in individual powder capsules composed of tricalcium silicate, calcium carbonate, and zirconium oxide that are mixed with liquid containing water, calcium chloride to accelerate setting, and modified polycarboxylate as a plastifying agent. The powder is mixed with the liquid for 30 seconds with an amalgamator. Biodentine possesses adequate handling characteristics because of its excellent viscosity and short setting time which is 12 minutes.4

The aim of this article is to present a case report on management of tooth with open apices with the help of biodentine.

A 9 years old child reported to the department of Pediatric Dentistry with a chief complaint of fractured teeth. Fractured occurred 1 month back. No sign and symptom of pain was present at the time of clinical examination. No other significant dental or medical history was found and no known drug allergies were noted. Intraoral examination revealed Ellis Class IV fracture in relation to teeth 11 and 21. Palpation and percussion test of the involved tooth did not reveal any tenderness. The tooth was not mobile. Electric pulp testing of the involved tooth gave no response, whereas response was obtained on adjacent teeth. The radiographic examination of the tooth revealed a wide canal with an open apex (Figure 1). Clinical and radiographic examination indicated pulp necrosis.

Tooth was anaesthetized and under rubber dam isolation a conventional endodontic access cavity was established. A periapical radiograph was taken to determine the working length of the teeth (Figure 2). Biomechanical preparation was done using K-file. Root canal debridement was done using alternate irrigation with 2.5% NaOCl and saline. The root canal was then dried with sterile paper points. Calcium hydroxide and iodoform combination (Metapex™, META Biomed Co. Ltd., Korea) was placed in the root canal, and the patient was recalled after 1 week. One week later, the tooth was again isolated under rubber dam, the calcium hydroxide dressing was removed by hand instrumentation, and irrigation was done with 2.5% NaOCl and EDTA Smear Clear (SybronEndo, CA, USA). The root canal was then dried with sterile paper points.

The mixture of Biodentine™ was then prepared. Material was placed inside the canal in increments. The material was then delicately pushed towards the apex with a root-canal plugger. Several increments were required to form a plug of adequate thickness (>4 mm), which was confirmed radiographically. Same procedure was followed for the adjacent tooth (Figure 3). The canal was backfilled with gutta-percha (Calamus Dual, Dentsply Maillefer, Switzerland) (Figure 4) with AH Plus resin sealer (Dentsply DeTrey, Germany). The tooth was immediately restored with a composite restoration (Tetric N-Ceram, Ivoclar Vivadent), and in subsequent visits, acrylic crowns were placed on tooth 11 and 21(Figure 5). 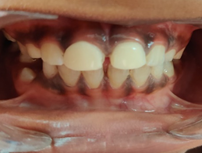 One year post-operative (Figure 6) follow-up revealed restored aesthetics and function, absence of any clinical signs or symptoms of periradicular pathosis, resolution of periapical rarefaction, and a thin layer of calcific tissue formed apical to the Biodentine barrier.

The main purpose of apexification is to obtain a barrier at the apex of teeth, which is to prevent the passage of bacteria and other toxins into periapical tissues from the root canal. This barrier is necessary to allow compaction of root filling material. The goal of the treatment for these cases is to create an apical barrier which will prevent the penetration of bacteria and toxins in the periapical tissue from the root canal. After the discovery of MTA by Torabinejad et al.5 it has become the material of choice for apexification. The only drawback is the long setting time, apart from discoloration potential, poor handling characteristics, low washout resistance and high material cost.6

Biodentine considered as a new bioactive dentin substitute cement. It is composed of powder that consists of tricalcium silicate, dicalcium silicate, calcium carbonate, calcium oxide, zirconium oxide, and CH. It has a shorter setting time of 12 minutes, as compared with that of MTA, which is 2 hours 45 minutes.7 According to Kokate SR and Pawar AM,8 Biodentine™ exhibited the least microleakage when compared to other materials such as glass ionomer cement and MTA as a retrograde filling material. Khanduri N et al.9 in their study concluded that the use of Biodentine in creating a calcific apical barrier explores a new paradigm in the field of apexification excellent biocompatibility, hydrophilic property, tighter seal, and shorter setting time of Biodentine make it a promising material for single-visit apexification.

Biodentine can be used as an effective alternative to MTA. Biodentine as a material of choice for single visit apexification is a new boon in effective management of teeth with open apex.