Background: Successful eruption of impacted third molars requires the establishment of proper mesio-distal angulation as the tooth erupts into the oral cavity. Extraction of premolars in orthodontic cases may favour the eruption of third molars.

Results: There was statistically significant difference in the space between the anterior border of the ramus and the second molar. But there was no significant difference in the angulation of the third molars. So even if there is a gain of space for the third molars to erupt, the changes in the angulations of third molar does not favour the spontaneous eruption after the orthodontic treatment with extraction of 1st premolar.

Conclusion: Extraction of 1st premolar has positive influence on the space available for the third molar eruption. But there are no changes in the angulations of the third molars that would in turn help in the eruption.

Third molars exhibit great variation in shape, size, position, root formation, time of development, and path of eruption. Third molar impaction is the most common of all tooth impactions.1 In primitive mankind, excessive inter-proximal attrition allowed mesial drift of the posterior teeth and it decreases the incidence of third molar impaction. The lack of space between the ramus and the second molar has long been cited as a major etiologic factor of mandibular third molar impaction.2 Successful eruption of impacted third molars requires the establishment of proper mesiodistal angulation as the tooth erupts into the oral cavity. In some cases, the third molars are uprighted during the course of eruption, and in other cases third moalr tip mesially, leading to difficulty in functioning and requiring orthodontic uprighting.3

For most of the correction of malocclusion space is required and extraction of premolar is the most recommended method of space gaining. This in turn, can affect the angulations and space available for the third molar eruption.4

Posterior available space is a significant factor for the eruption of mandibular impacted third molars and high rates of third molar eruption have been reported after the mandibular first molar extraction.5, 6

Inclusion criteria used in category I were patients of age 18 to 25 years, impacted mandibular third molars should be seen on a panoramic radiograph, the root development of the third molars is complete, treatment of the first premolar extraction cases included full closure of the extraction spaces, the total treatment time in the extraction cases should have been not less than 24 months and high-quality pre-treatment and post-treatment orthopantamogram without any magnification and distortion errors and in which a clear, well defined anterior nasal spine (ANS), nasal septum, and the projected shadow of the palatal plane.

In category II, inclusion criteria used was patients of age 14 to 17 years, impacted mandibular third molars should be seen on a panoramic radiograph, incomplete root development of the third molars, treatment of the extraction cases included full closure of the extraction spaces, the total treatment time in the extraction cases should have been not less than 24 months and high-quality pre-treatment and post-treatment orthopantamographs. Exclusion criteria were orthopantamographs with missing third molar, poor quality panoramic radiographs, cases where space closure is not completed.

The OPGs of patients treated in, Mangalore from the year 2015 to 2019 were taken for the study. Forty eight mandibular third molars are considered for the study, out of which roots of 24 third molars have completed and the other 24 have incomplete root formation. All the patients have undergone orthodontic treatment. The subjects included in study, were treated with premolar extraction. At the end of the space closure, all lower third molars were examined on the final orthopantomograph (OPG) as well. The tracing of pre-treatment and post treatment OPGs were done. The parameters were measured in the photocopy of the traced sheets. The following measurements were done (Figure 1). In molars with incomplete root the long axis is marked by drawing a bisector of the mesio distal width of third molar (Figure 2).

Angular and linear measurements used in category I 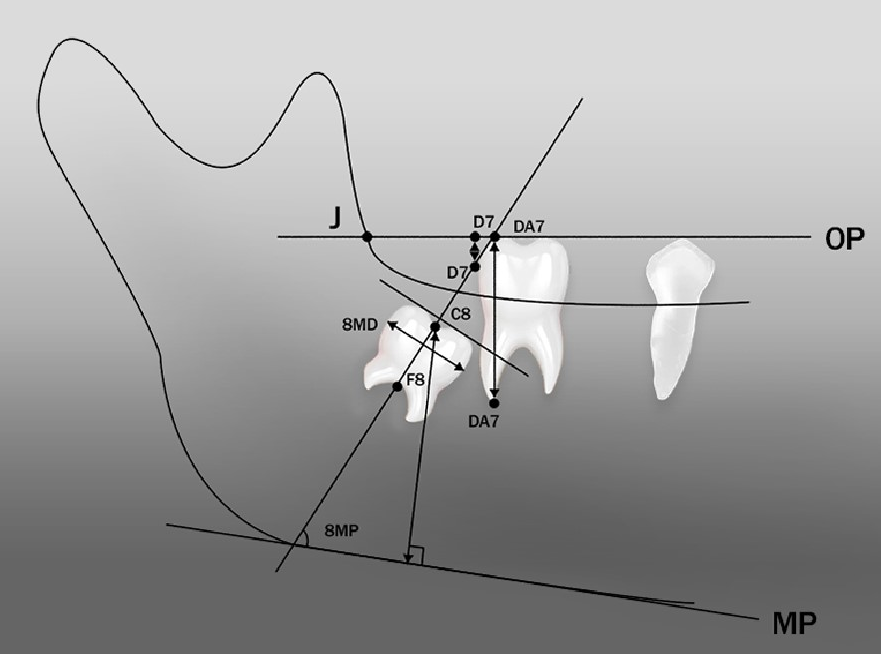 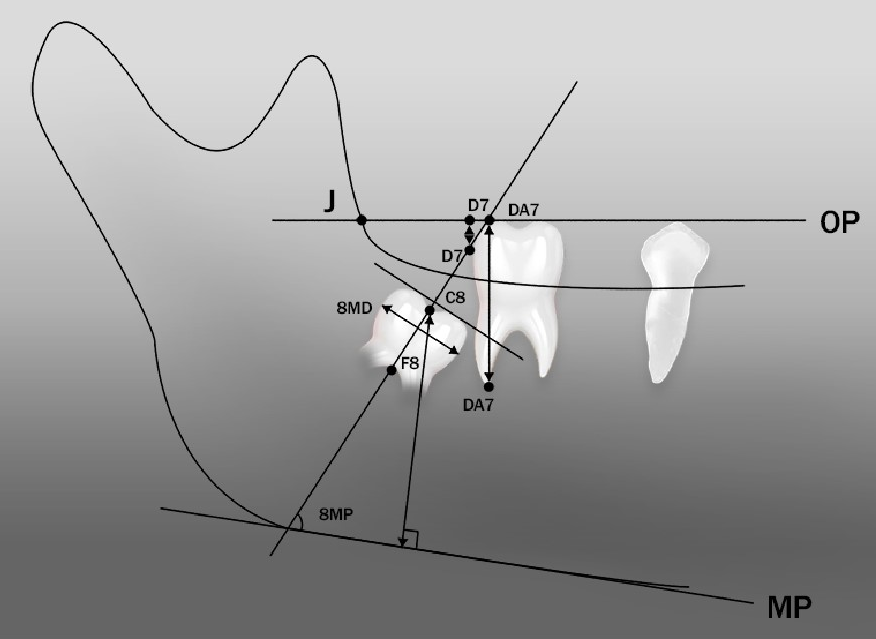 The values got from OPG of pre-treatment and post-treatment OPGs were compared and were used for statistical analysis. Match pair T test with level of significance 5% power 80% and effective size 0.6 the minimum sample size required is 24 in each category.

Data was entered in MS Excel sheet. Statistical analysis was performed with SPSS version 23.0. Data was compared using the match pair T test. The level of significance was 0.05.

Measurements considered in category I; The following table depicts the pre and post values of the category I

Measurement in category II ; The following table depicts the pre and post values of the category II

Mandibular third molar impaction is one of the major problems facing the dental profession, with evolutionary changes being cited as a significant culprit. Ironically called the “wisdom teeth,” third molars are commonly blamed for a variety of complications, although their role in such complications has not necessarily been confirmed. 7 The role of mandibular third molars on the relapse of mandibular incisor crowding following the cessation of retention in orthodontically treated patients has been a subject of much speculation. The orthodontist should be aware of the relationship of the mandibular third molars to the remaining teeth in the mandibular arch. The main points to be decided are either these teeth will erupt or get impacted, whether they will cause crowding of the lower anterior teeth, and whether the extraction of other teeth will prevent crowding and influence their eruption.8

The implementation of the correct position depends on numerous factors: the development of facial structures, the sagittal growth of the skeletal bases, the resorption on the anterior border of the ramus, the mesial movement of the posterior teeth, the increase in retromolar space, the vertical uprighting, and the mesiodistal dimension of the tooth.9, 10

All linear measurements and ratios represent the space available for the third molars to erupt. The results clearly stated that after the orthodontic treatment with first premolar extraction the available space for the eruption of third molar increases. Our results are in agreement with Jain et al.11 But this can also be due to two other factors such as anchorage and mandibular growth. We have considered cases with maximum anchorage consideration. In maximum anchorage cases, there is 25 percentage of anchor loss.13 In a study, Un-Bong Baik et al.14 they estimated factors associated with spontaneous angular changes of impacted mandibular third molars due to second molar protraction. They concluded that space available for third molar eruption before and after second molar protraction are not associated with the uprighting of erupting lower third molars. So the increase in space can be caused by anchor loss.

Another factor that can cause an increase in the available space for third molars is mandibular growth. The age groups that have been considered in this study have the chances of showing late mandibular growth. This can cause increase in space between the body and ramus of the mandible for the eruption lower third molar.15 According to Kaplan,16 an insignificant resorption of the anterior border of the ramus is apparently responsible for impaction of third molar. Even if the study does not involve a control group to assess this influence, there are various studies that compare extraction and non-extraction cases. In these studies it has been observed that space available for the third molar has increased in both of the cases, with greater space in extraction case. So inspite of the remodelling happening in the ascending ramus as a part of growth of mandible, extraction has an influence on creating space for the eruption of third molars.

Shortcoming of this study is that anchorage and growth of the mandible have not been considered. This would have been overcome by doing a comparative study between extraction and non- extraction cases. By considering non-extraction cases we could have understood how much influence the anchorage and growth of mandible has on availability of space for the eruption of third molars at the end of orthodontic treatment.