Background: Endodontically treated teeth are generally weakened as a result of loss of tooth structure due to decay, previous restorative procedures and endodontic access preparation. Ideal coronal reconstruction of endodontically treated tooth is still a challenge for restorative dentistry. Post and core system is a widely used method for treatment of structurally weakened teeth.

Materials and Methods: Two extracted, caries-free maxillary central incisors with straight root canal were collected and mounted. Post space preparation were done and restored with fiber post and dentin post respectively. The model is simulated using the software “Creo” and this data is then transferred to software “Hypermesh” to create a Finite Element model i.e., a mesh of nodes and elements. This mesh is programmed to contain the material properties which defined how the structure will react to loading conditions at different angles. The Analysis is carried out using the Ansys software.

Results: The FEA results showed that the Dentin post have better fracture resistance.

Conclusion: The comparison between fiber and dentin posts exhibited a better stress resistance of dentin post over fiber post. Further research in this regard is required to support the findings of this study results.

Endodontically treated teeth are generally weakened as a result of loss of tooth structure due to decay, previous restorative procedures and endodontic access preparation. Further destruction of these teeth can be prevented by a protective restoration. Post and core system is a widely used method for treatment of structurally weakened teeth. The primary objective of post and core procedure is replacement of the lost tooth structure in order to facilitate crown support and retention.1 Numbers of different materials have been used for the manufacturing of dental posts. Metal alloys have been the chosen material for years. The main disadvantage of these structures was the concentrated stresses in zones that are vital to the tooth root. Many authors believe that the use of any dental post with a Young’s modulus higher than the dentin can create stresses at cement interfaces and can cause the separation of the post or a root fracture.2

Prefabricated fiber posts embedded in a resin matrix have been suggested as a promising restorative material that presents appropriate esthetics and biocompatibility. These posts are easy to use and show an elastic modulus similar to human dentin, which favors stress distribution along the root axis.3 Ideally, the post material should have a physical property such as modulus of elasticity, compressive strength, and thermal expansion, as well as esthetics similar to those of dentin, and it should bond predictably to root dentin. However, the only material that can substantiate all these properties can be none other than dentin itself. A few reported cases using dentin as post material have shown successful outcomes. Hence, a thorough investigation should be carried out for the probability of human dentin to serve as a post material.4

The finite element method (FEM) is based on a mathematical model, which approximates the geometry, loading and constraint conditions of a structure to be analyzed. Deformations and stresses at any point within the model can be evaluated and highly stressed regions can be analyzed. The elastic modulus and the poisons ratio for the modeled materials are specified for each element. A system of simultaneous equations is generated and solved to yield predictable stress distribution in each throughout a structure.5 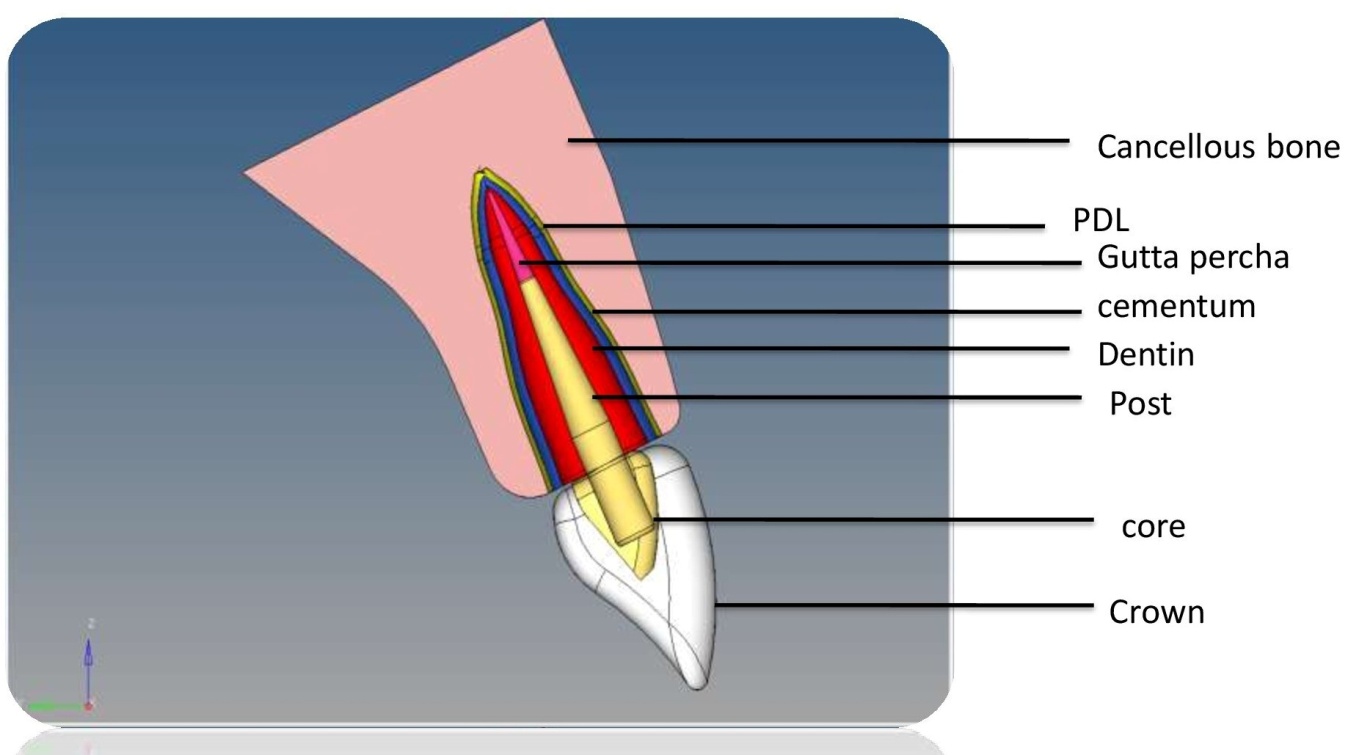 The model I represent a pulpless tooth, with 5 mm of remaining Gutta-percha apical seal, restored with a fiber post. The model II represented the same tooth structure, but with dentin post.

The models then transferred to the software “Hypermesh (1) version 11.0” for the process of meshing. Meshing divides the entire model into smaller nodes and elements which make a grid called “mesh” (Figure 2).

Cross section of the model after meshing 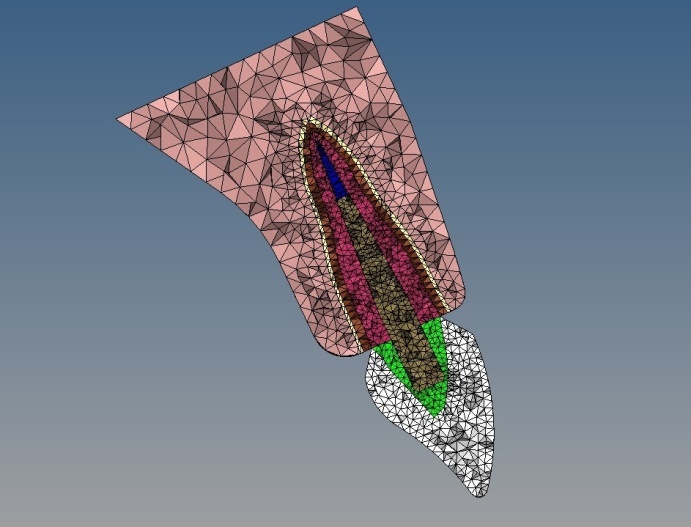 The mesh acts like a spider web, in that, from each node there extends a mesh element to each of the adjacent nodes. The basic theme is to make calculations at only limited (finite) number of points and then interpolate the results for the entire domain (surface or volume). This mesh is programmed to contain the material properties (elastic modulus, Poisson’s ratio), which define how the structure will react to the loading conditions, i.e., with the incorporation of material properties the structure simulates the available natural product.

The elastic modulus and the Poisson’s ratio of the materials involved in the finite element analysis are described in Table 1.

Materials properties used in the study

The analysis was carried out using the software “Ansys1 Version 19.0”. 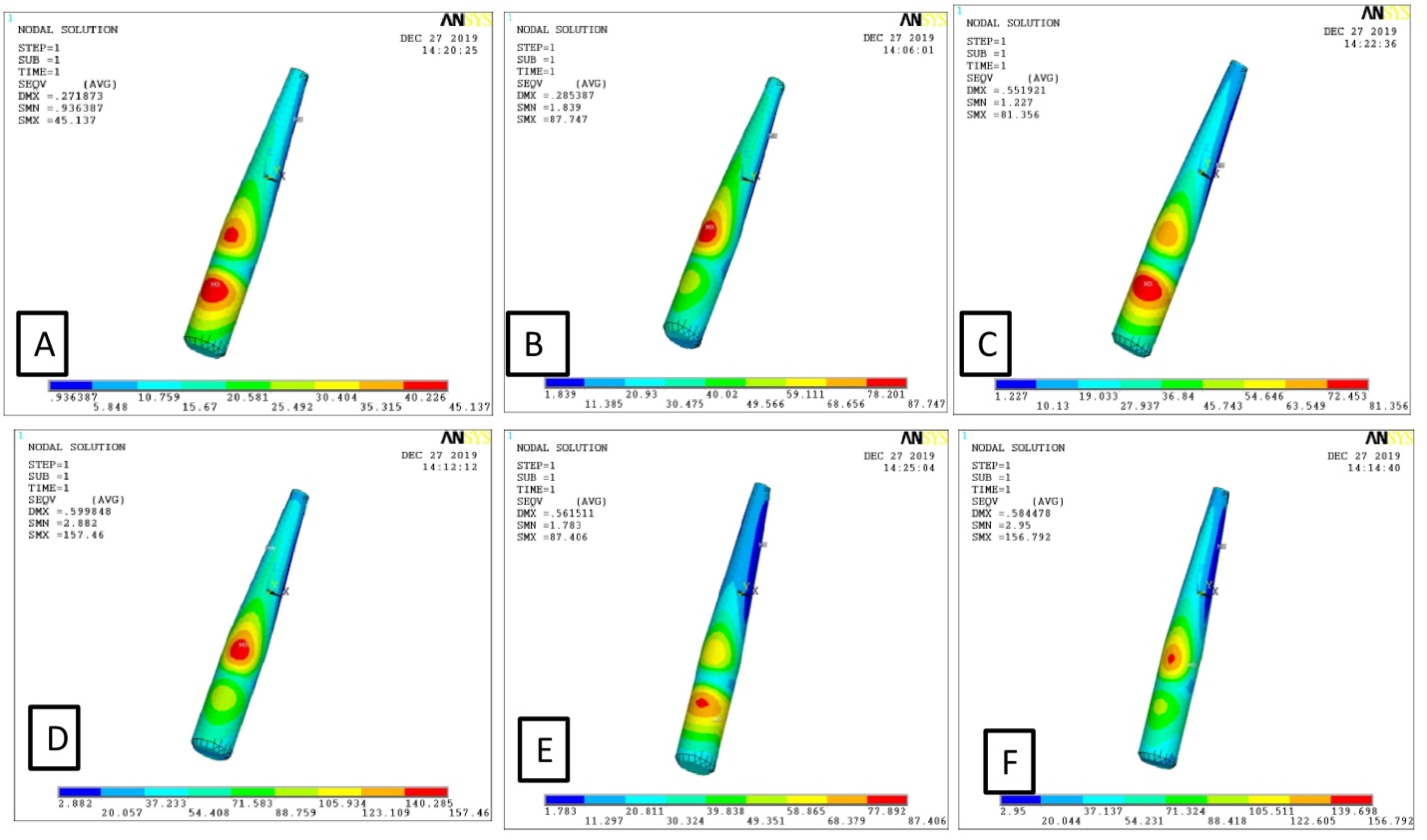 Results were presented by considering von Misses criteria.9 he stresses were visualized in color coding ranging from dark blue (minimum stress) to red (maximum stress) in the models. All the stress values were showed in Megapascals (MPa) (Figure 4 a-f).

Maximum stresses created on both the posts at various angles are summarized in Table 2.

Maximum stresses created on both the posts at various angles

Dentin has a complex microstructure and simulation of its biomechanical properties remains a challenge. Some researchers have used human teeth for the fabrication of an intracanal retainer, referred to as a “dentin post”. Recent studies have suggested that a dentin post enhances stability and adhesion, which reduces the risk of fracture of endodontically treated teeth.3 The dentin post (Figure 5 a) can be prepared from extracted premolar or canine. After ensuring all the bio security standards the crown portion of the tooth selected for dentin post preparation was separated from the root using a diamond disk (Figure 5 b) and then the tooth was sectioned bucco-lingually along the long axis (Figure 5 c-e).

A): Extracted premolar to be used as dentin post; B): crown portion was separated from the root using diamond disc; C): sectioning of the tooth bucco-lingually D): After sectioning E): Dentin post 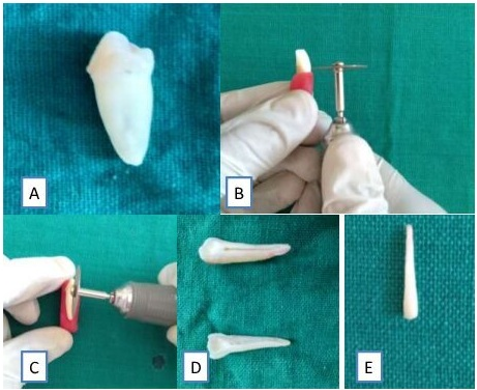 The direct wax impression of the post space served as a guide to prepare the post in the appropriate shape and dimension. The adhesion among the “Biological Post,” the cementing agent, and the dental structure allows one to attain a sole biomechanical system – MONOBLOCK, with materials that are compatible among themselves.10, 11

The result of this study is in contrast with study done by Henrique et al3 in 2016 where the results concluded as the fiber and dentin posts exhibited similar stress values and distribution. Another study carried out by Memon et al.4 in 2016 where they compared glass fiber post and dentin post shows that the, the stress in the cervical area of the dentin was more for fiber post when Compared to dentin post which comes in accordance with the present study. To ensure bio security standards, the donor was subjected to a thorough review of medical history and routine blood investigations before the initiation of the procedure. While preparing the dentin post, the extracted tooth was properly cleaned, stored, and Sterilized by autoclaving at 121°C for 15 minutes.10

The present study shows that the dentin post displays a lesser amount of stress distribution under loading condition at various angles compared to fiber post which further needs to be confirmed through more in-vitro that incorporates various other intra canal posts in comparison with dentin post as well as through in vivo studies.