Aeran, Tuli, and Anamika: Ligaplants: Recreation of a natural link in implant dentistry: A review

Ligaplants: Recreation of a natural link in implant dentistry: A review

Missing teeth can be substituted by the use of the dental implants. This treatment modality has been proven to be a gold standard for replacement of the missing tooth in the past decade. The most widely used implants in the current scenario are the osseointegrated implants with various shortcomings and the most prominent one is the lack of the periodontal ligament. To overcome this, implants with periodontal ligaments can be procured and this can be possible by the application of the tissue engineering concept along with suitable implant material. Tissue engineering has become an integral part of the periodontal therapy and its use has opened various gates in the field of dentistry. A tissue engineered periodontal ligament around the dental implant has been introduced in the past few years and is called as ligaplant. These ligaplants has become a promising option that can provide good biological performance leading to an increased life of the prosthesis. This review article highlights the advantages of the periodontal ligament combined dental implants in comparison to the conventional implants and also the process of their procurement has been discussed.

From past few decades, the replacement for the missing teeth is done by the dental implants that are also called as oral or endosseous implants. Due to their high success rate and high predictability, these are revolutionary as well as extremely important additions to the dentistry. Implants assimilate to the surrounding tissues, upon which, their success rate depends. Assimilation of dental implants depends upon numerous factors like quantity and quality of bone, material of the implant as well as the loading condition. Neighbouring soft and hard tissues around the implants are known as peri-implant tissues. There should be an intimate relationship among the surface of the implant and the surrounding bone and this relationship is called as osseointegration.1

For now, the most widely used implants are the osseointegrated implants. The main shortcoming of these implants is that these lack the periodontal ligaments as present in the natural dentition. The osseointegrated implants are ankylosed and lack physiological mobility as the natural teeth and also lack the shock absorbing capacity as compared to the natural teeth. Periodontal ligaments consists of various types of cells like fibroblasts, osteoblasts, cementoblasts, cementoclasts, osteoclasts and undifferentiated mesenchymal stem cells responsible for the productive relationship among the bone and the tooth.2

Periodontal ligaments, present in between the alveolar bone and cementum of the teeth, have a crucial role in the regulation of the bone as well as tooth support in the alveolus. Different types of progenitor cells are seen in these tissues, crucial for maintaining the homeostasis of the periodontium. Lately, periodontal ligament stem cells are used for therapies related to the titanium dental implants such as implants coated with these cells and hence can be considered as substitutes to the osteointegrated implants.3

In the past few years, LIGAPLANT, that is a combination of the implant biomaterial along with the Periodontal ligament cells has become a new strategy for the replacement of the missing tooth and it provides a better biological performance as it includes the development of the periodontal ligament attachment surrounding the dental implants.4

As ligaplant is an amalgamation of the periodontal ligament cells and implant biomaterial, thus periodontal ligaments formed facilitates the micro movements and shock absorption contrary to the conventional implants and have a positive impact on the quality of the distribution of forces among the teeth abutments and prosthesis supported by the implants. Their use may overcome the shortcoming of the conventional implants and may provide better physiological results that can lead to increased lifeline of the prosthesis as these implants mimic the form and function similar to that of natural teeth.

The conventional osseointegrated implants lacks the fibrous capsule and also the interfacial layer at the interface of the titanium and bone have abundant noncollagenous proteins and few plasma proteins. The implant-bone interface of these implants is rigid due to which these do not possess crucial properties such as biological remodelling and plasticity leading to the lack of the mobility while the functional loading. This results in the shift of extreme stresses to the adjacent bone responsible for the loss of the marginal bone. Whereas, incorporation of the periodontal ligaments around the dental implants may help in the cementum formation on the surface of the implant along with the periodontal attachment apparatus comprising periodontal ligament fibers and the sharpey’s fibers supporting the remodelling of the bone.4 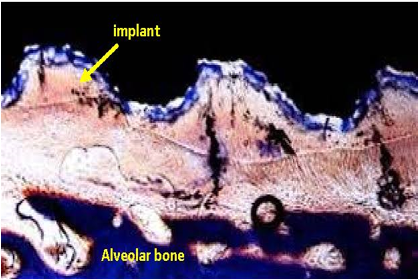 The Basic Concept in Foundation of the Ligaplant

Tissue engineering has become a revolutionary strategy for the preparation of the scaffolds made up of biodegradable polymers with growth factors that can facilitate production of the tissues. It is based on the principle of life sciences and engineering. Osteoconductive matrix along with the tissue engineering products upgrades advantageous effects of these materials by revascularization and increasing cellular ingrowth. To the original cementum of the teeth, a layer of cementum gets attached with which the regeneration starts and into which freshly formed transverse fibers gets consolidated.6

By merging the three main principle constituents, the concept of the tissue engineering is interpreted as a triangle that states that combining these elements will facilitate regeneration. These key elements are scaffolds or matrix, signalling molecules and cells. Scaffold used, will act as a three-dimensional structure and will facilitate the migration and proliferation of the cells and leads to the formation of matrix leading to the development of the tissue.7 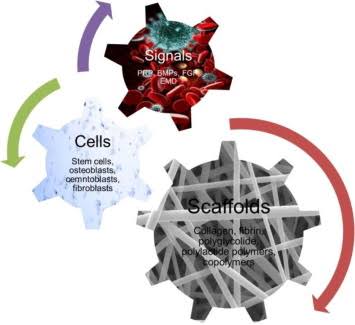 By using the signalling molecules, over the biodegradable matrix and scaffolds, the cells are cultured, after which these are transplanted to the body. This technique is called as the in vitro technique. On the other hand, the cultivated vital elements are deposited in the tissue defects followed by the physiological process of the healing in body leading to the regeneration. This technique is called the in vivo technique that causes the intrinsic healing activity by the use of these three elements of tissue defect sites. Ligaplants can be procured by both in vivo and in vitro technique.9

Ex vivo technique- For the formation of the organs and the tissues in a culture room by amalgamation of the scaffold or matrix, cells and signalling molecules prior to the transplantation of newly tissue-engineered organ to the patient’s body. In vivo technique facilitates intrinsic healing activity at the required site.10 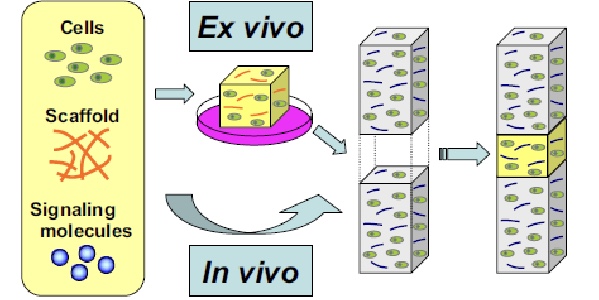 After the extraction of the donor tooth, it is immediately replanted into its native alveolus 14 days prior to its transplantation. There is cell proliferation and differentiation due to the activation of the process of healing within the periodontal ligament, caused by the intentional trauma. Tooth can be transplanted after fourteen days, at the time, when the cell culture reaches its peak with various cells at the root surface attached by freshly formed sharpey’s fibers.

An identical cell culture, by utilizing tissue engineering around an artificial root is a new concept that has been introduced to produce ligaplant by the following three steps:

N-isopropylaclamide monomer in the solution of 2-propanaol was expanded onto polystyrene culture dishes. By using an Area Beam electron processing system, irradiation of the electron beam was put through these dishes. For the removal of the ungrafted monomer, rinsing of these dishes is done and are sterilized with ethylene oxide.

Human periodontal ligament cells are then taken by scraping the middle third of the root periodontal tissues from an extracted tooth, by using a scalpel blade. Then these tissues are planted into the culture dishes having Dulbecco’s modified Eagle’s minimal essential medium augmented with 100 units/ml of penicillin-streptomycin and 10% serum of fetal bovine. These out growth cell are then cultured by providing a humidified atmosphere of 5% carbondioxide at a temperature of 37 degrees for 48 hours to facilitate the attachment of cells to the dishes. The medium needs to be changed at least three times in a week and the debris are removed by washing these dishes. At 37oC along with ascorbic acid 2-phosphate (50mg/mL), 10nM glycerophosphate and 10nM dexamethasone and a cell density of 1x 10,5 the human periodontal ligament cells are kept on a temperature- responsive culture dishes that are 35mm in diameter. It acts as a medium for osseodifferentiation for procuring the cell sheets.4

Titanium pin that is glazed with hydroxyapatite is kept in a hollow cylinder made up of plastic and also around 3mm of gap is kept around the pin. By this 3mm gap, the culture medium is constantly pushed. For around 18 days, single cells suspension procured from humans is implanted into the vessels made up of plastic under the flow of growth medium.11 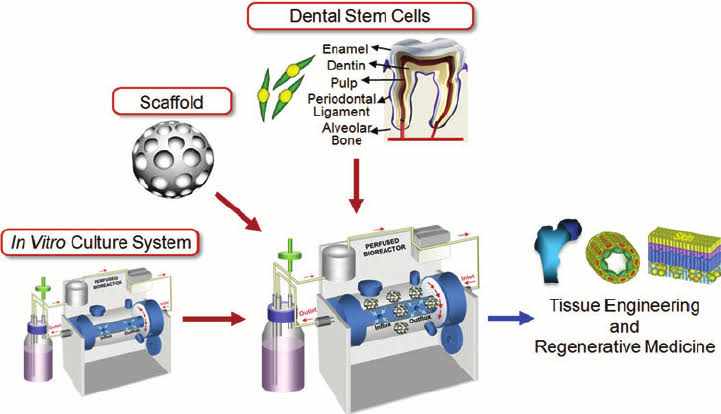 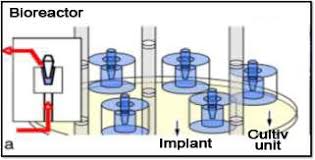 Precautions while Preparing the Ligaplants

There should be small mechanical movements of the medium flow while the preparation of the ligaplants. There should be optimal space in between the implant and the culture. Time for which the surface treatment is done should also be optimal for the procurement of a good Ligaplant. Adequate sterilization is also necessary. The culturing of the cells should be optimal to prevent the growth of non-periodontal ligament cells.10

To produce a regenerative periodontal ligament, site-specific signalling is a crucial factor that is consecutively mediated by an anatomic code that is written in expression patterns of Homeogene-coded transcription factors. Therefore, synthesis of the surface of the cells and signalling components is affected by the homeoproteins, the signals from the surface of the cell react to modulate Homeogene expression that leads to the establishment of the cell identities as asporin that is an SLRP protein existing in extracellular matrix has been discovered.13

Ligaplants, a revolutionary new strategy, has been clinically tested in vitro as well as in vivo. Various studies on animals have reported positive results but correlation of results of the in vivo studies are still to be done. As per the strong evidence reported in the literature, this can be the near future of the implant therapy as it can provide the function, form and responses identical to that of the natural teeth.9

The implant dentistry has been transformed by the Introduction of periodontal tissue engineering. Based on the modality, ligaplants have been recently introduced to overcome the shortcomings of the conventional implants. Majority of the studies related to the ligaplants, done on the animals has shown successful results but still more achievable and practical way of procuring the periodontal ligament attached implants needs to be introduced. Also more human studies need to be done to evaluate the successful outcome of this strategy. As ligaplants has various advantages in comparison to conventional implants, these can emerge as a new revolutionary addition to the implant dentistry.4