Traumatic cyst of the mandible with fibrous invasion: A rare case variant

A non-neoplastic intraosseous pseudocyst devoid of epithelial lining is a classified for traumatic bone cyst. The most of cases are caused due to low-grade infection, intraosseous vascular abnormalities, degeneration of bone tumors, local alteration of bone metabolism and also by trauma. Traumatic bone cyst is associated with representing resolving fibro-osseous lesion. This case was accidently noted and with asymptomatic condition in which according to radiological condition and histological finding it was noted as “Traumatic Bone Cyst”.

Traumatic bone cyst (TBC) was described first by Lucas and Blum in 1929 who coined the term “Traumatic bone cyst”. It is defined as a “non-neoplastic intraosseous pseudocyst devoid of epithelial lining” by the World Health Organization (WHO). It has been referred by different terminologies like a simple bone cyst, hemorrhagic cyst, idiopathic bone cavity, progressive bone cavity, and solitary unicameral bone cyst. Many theories describe the etiology but no definite etiology has been determined. The trauma-hemorrhage theory proposed trauma followed by degeneration of clot to be responsible for the development of the cyst. But most cases of traumatic cyst have no history of trauma to be associated. The factors suggested to be associated are low- grade infection, intraosseous vascular abnormalities, degeneration of bone tumors, local alteration of bone metabolism, and trauma. The traumatic bone cyst has also been associated with representing resolving fibro-osseous lesions.

A traumatic bone cyst is usually asymptomatic and hence diagnosed on a routine radiograph. TBC may be lined by fibrous connective tissue without epithelium.

Our case report discusses a rare variant of TBC associated with fibrous hypertrophy.

A 19-year-old male patient had reported to the department of orthodontics & dentofacial orthopedics of KVG Dental College with the chief complaint of malaligned teeth since the past 5 years. The patient was then referred to our department of Oral & Maxillofacial Surgery of KVG Dental College for evaluation of an asymptomatic unilocular radiolucency of the mandibular anterior region which was found while routine radiographic screening for orthodontic treatment.

When the patient reported to us, with an of the history of dental extraction 7 months back with respect to 47,43,37. On local examination, a face was bilaterally symmetrical (Figure 1). Skin, nose, eyes, ears & lips looked normal. Mouth opening was adequate. There was no loss of sensation. TMJ bilaterally palpable with no associative abnormality and no lymph nodes were palpable. 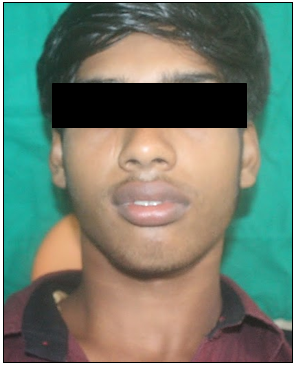 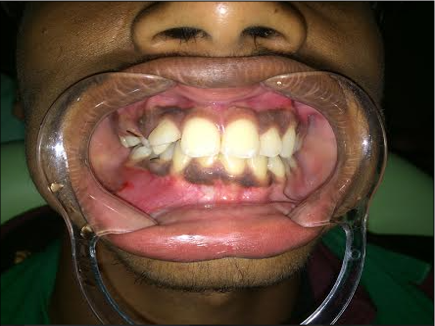 On intraoral examination, the buccal and lingual mucosa, palate, tongue (both dorsal and ventral surface), floor of mouth were normal (Figure 2). Periodontal status was found to be fair. No swelling or draining sinus was noted. Missing tooth were 13,14,15,37,32,42,47. On palpation, all the inspector findings were confirmed but no abnormality could be detected.

On radiographic examination, panoramic review a unilocular well defined radiolucent seen with scalloped border measuring about 6 x 3 cm extending from the mesial root of lower right molar to mesial root of the lower left premolar. Missing 37,47 and congenitally missing 32 and 42. Impacted 13 and 14(Figure 3). On further investigation computer tomography was done, a coronal section of CT(Figure 4) relieved radiolucent lesion with a scalloped border. Mandibular canal is placed buccally on the right side and left side mandibular canal is on centrally placed, in sagittal section (Figure 5). Presence of lesion with scalloped margin extending from the mesial root of 46 till mesial root of 35 with thinning of lingual cortical plate and expansion of buccal cortical plate. Axial section(Figure 6) on maxilla impacted reveals 13 and right mandibular canal pushed buccally mandibular nerve length on the left side is 11.85 and width is 21.97 and on the right side is 12.15 and width is 30.49.

The patient was provisionally diagnosed with Odontogenic Keratocyst (OKC).

A fine needle aspirated was showed serous with bloody fluid(Figure 7). Histopathology report revealed protein estimate to be 5.8g/dl and diagnosis as odontogenic keratocyst. 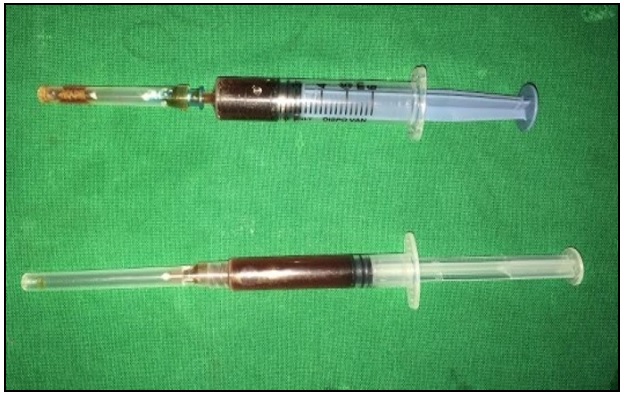 A biopsy was been taken with a removal of 1 cm2 of bone by postage stamp method. The biopsy report showed the presence of extravasated RBC with both acute and chronic inflammatory cells small fragments of fibro cellular connective tissue suggestive of Traumatic bone cyst (TBC). The treatment plan was cyst enucleation under general anesthesia. A patient was kept for a regular follow up.

Traumatic bone cysts are generally detected in patients of the second and third decade of life.1 The lesion remains asymptomatic and it is mostly identified during routine radiographic examination.2 Traumatic bone cyst occurs in the mandible predominantly in the posterior region, usually extending from canine to third molar region.3 However, in our case, the lesion was located bilaterally in the mandibular anterior region extending from central incisor to the distal aspect of the premolar. Both traumas insufficient to fracture a healthy bone and iatrogenic trauma induced by either tooth extraction or orthodontic treatment have been implicated as inciting factors in traumatic bone cyst formation.

In literature, irrespective of the location of the traumatic bone cyst, the etiology remains unclear. Among the many theories, three predominate ones are: (1) an abnormality of osseous growth, (2) a degenerating tumoral process, and (3) a particular factor triggering hemorrhagic trauma.4 In Howe's series,5 over one-half of the patients had a definite history of trauma and the author noted that the severity of the trauma was a striking feature.

In some case reports of TBCs, the authors have been discussed the possibility of the performed dental extractions may be responsible for the trauma factor in their cases. Two of these extractions were considered difficult, whereas none of them was surgical.5 In our case-patient underwent extraction with respect to 47,43,37 since 7 month back in which postoperative healing was uneventful. Blum and Toma believed that there must also be a predisposing idiosyncratic factor in the pathogenesis of TBC, such as a peculiarity of the vessel wall or abnormal coagulation of the blood.6

The radiolucency characterizes the radiographic features with well-defined irregular or scalloped borders. Involvement of the radiolucency into the interdental bone spaces presents a lobular, scalloped or festooned pattern.7 The histology of traumatic bone cysts reveals only a connective tissue membrane lining the pathologic cavity, characteristic of pseudocysts. Cholesterol crystals, hemorrhagic foci, and osteoclasts may be found.8 In our case, FNAC report relieved as smear shows predominantly inflammatory cells, few epithelial cells and RBC flecks of keratin is also seen and biopsy relieved loose myxomatous connective tissue surrounding a large area of extravasated RBC’s with both acute and chronic inflammatory cells and small fragments of fibro cellular connective tissue.

The treatment plan of curettage should be performed surgically as it induces bleeding and further osseous regeneration.