Papillon-Lefévre syndrome (PLS) is an autosomal recessive disorder that is characterised by severe generalized early-onset periodontitis and palmoplantar hyperkeratosis. Besides these cardinal features some patients rarely exhibits recurrent pyogenic infections of skin, hair follicle infection (frunculosis), multiple abscess of skin, hyperhidrosis. This article represents a rare case of 17 year old young male patient with cardinal features of PLS along with history of recurrent pyogenic abscess of facial skin followed by scarring since childhood. There are multiple etiological factors like genetic, immunological, and microbial factors, consanguineous marriage and reduced host defense mechanism. Patients with PLS have increased susceptibility to infections. Over 300 cases have been reported till now in dental and medical literature with most of the cases discovered amongst Africans, Arabs and, Indians with 25% patients showing recurrent pyogenic infections. Management of the disorder primarily involves conventional periodontal treatment; oral hygiene instructions, antiseptic mouth rinses; and systemic antibiotic. Skin lesions are usually treated with topical application of emollients, keratolytic agents, steroids, and oral retinoid.

Papillon lefevre syndrome is a rare genodermatological disorder which was first diagnosed by two French Physicians Papillon and Lefevre in 1924, characterized by palmoplantar hyperkeratosis associated with early onset periodontitis and pre mature loss of deciduous as well as permanent dentition.1 Gorlin et al.2 reviewed 46 Papillon-Lefévre syndrome (PLS) cases and further added another feature of calcification of the falx cerberi to the syndrome. Haneke3 reviewed 124 cases of PLS and concluded that: (1) equal predilection for males and females; (2) no racial predominance of the condition; (3) consanguineous marriage is a feature in one-third of the cases (4) in 25% of PLS patients there is an increased susceptibility to skin infection. Onset of this disease usually coincides with the eruption of primary teeth, prevalence of 1-4 cases per million, no racial predominance, boys and girls are equally affected. Other features of PLS may include intracranial calcifications, susceptibility to bacterial infections, recurrent pyogenic infections and mental retardation.4

A 17-year old male patient reported with a chief complaint of multiple missing teeth and difficulty in eating. Past dental history revealed that the deciduous dentition was erupted normally, but soon teeth became hypermobile and exfoliation started at age of 3 years and complete shedding of all deciduous teeth occurred by the age of 6 years. Patient gives normal eruption history of permanent teeth, but they also became hypermobile and subsequently exfoliated. Patient had a reduced facial height and senile appearance due to resorption of the alveolar ridges [Figure 1]. Family history revealed his brother is also suffering from the same syndrome with typical features of palmar and plantar keratinization and premature shedding of teeth. 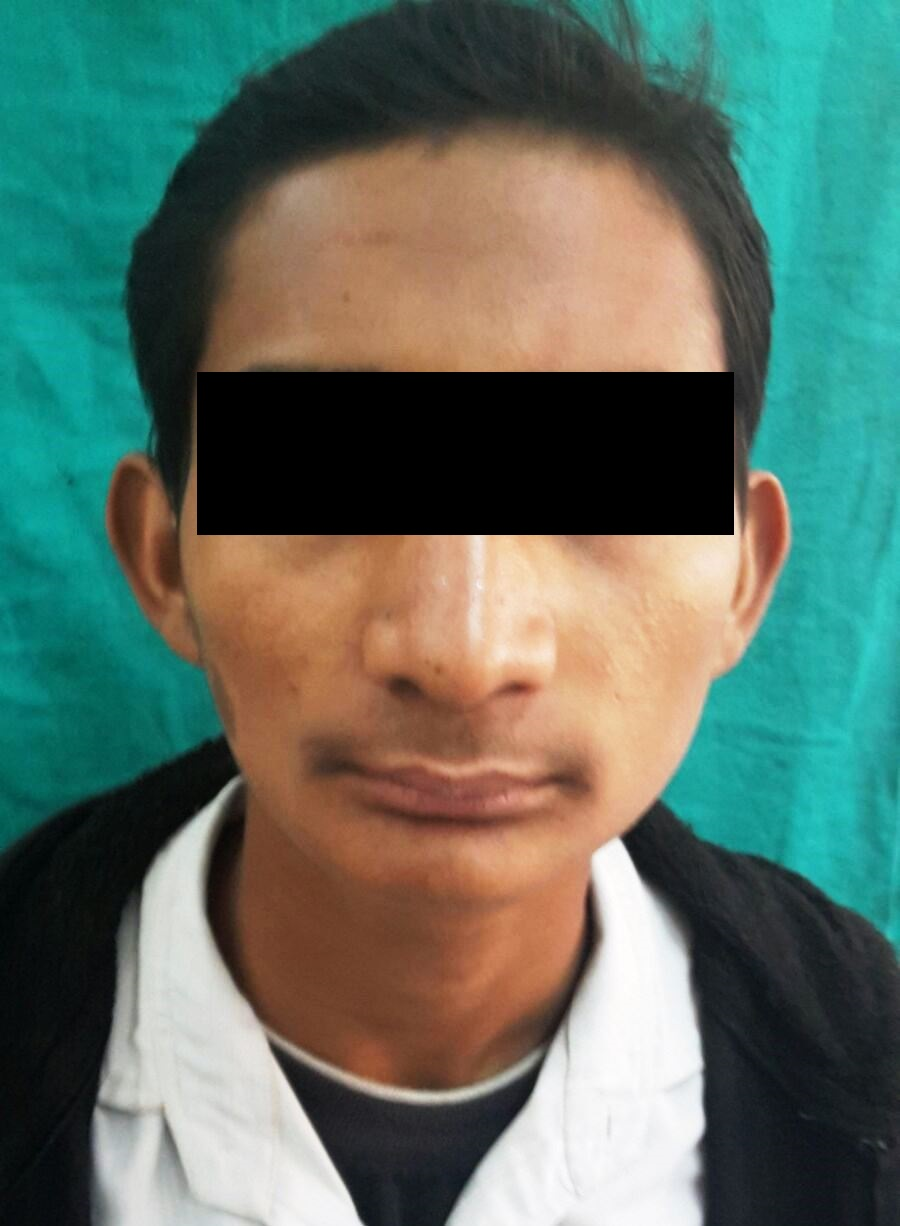 On general examination, the patient was moderately built with a steady gait. His family history revealed consanguineous marriage of the parents. The patient’s parents first noticed eruptions on the feet, arms, and hands at birth. Subsequently, at 5 months of age, the palms and soles became red, which gradually thickened and become rough and scaly.

Patient had multiple atrophic scars of size 1.5 x 2 cm on right side of face one in front of right ear tragus, and another 1 cm above lower border of mandible [Figure 2]. Patient gives history of recurrent multiple pustules formation in this region that heals followed by scarring. He also noticed recent increase in dryness, and his skin over malar region of face started becomes scaly. He also had similar pustule formation and hair follicle infection on chest, back, axilla, dorsal surface of feet and groin. Most of the lesions develop during winter season.

Atrophic scars on right side of face 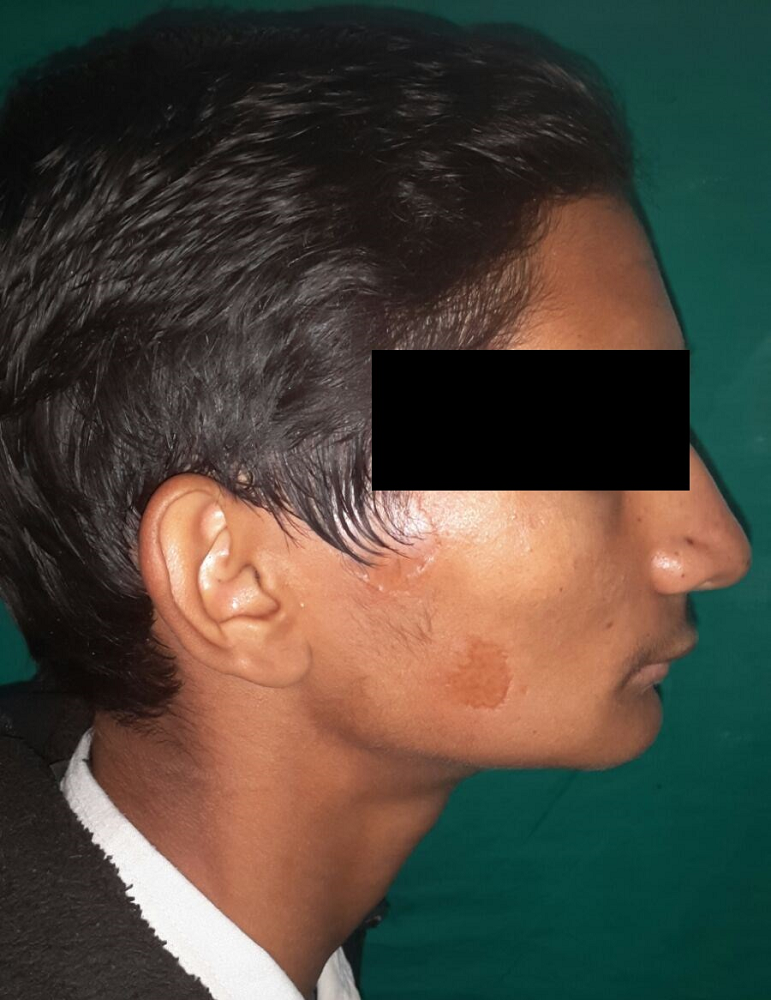 Dermatological examination revealed increased keratinization of the skin of the palmar surface of hands [Figure 3]. And plantar surface of the feet. Deep fissures were present on the soles of the feet [Figure 4]. Hyperkeratotic plaques were present the dorsal surfaces of the joints of the hands; the keratinized skin was clearly demarcated from adjacent normal skin [Figure 5]. Marked sclerodactyly of fingers of hands and feet seen. [Figure 6] 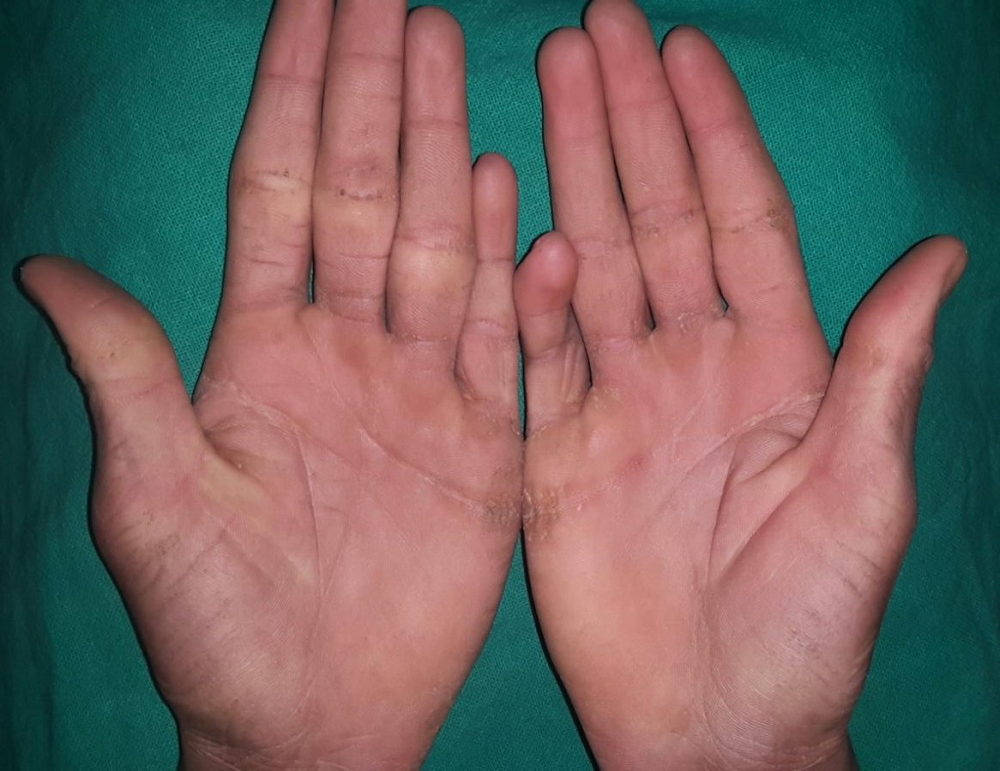 Keratotic plaques with deep fissures on ventral surface of feet 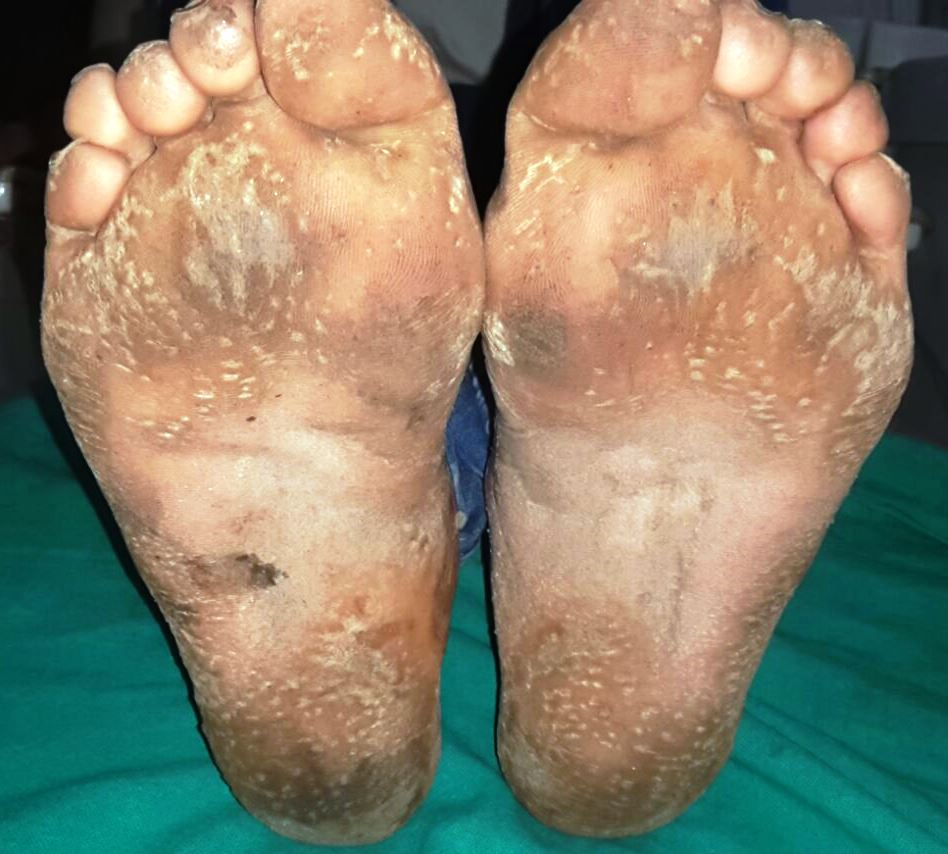 Keratotic plaques of dorsal surface of hands with sclerodactyly 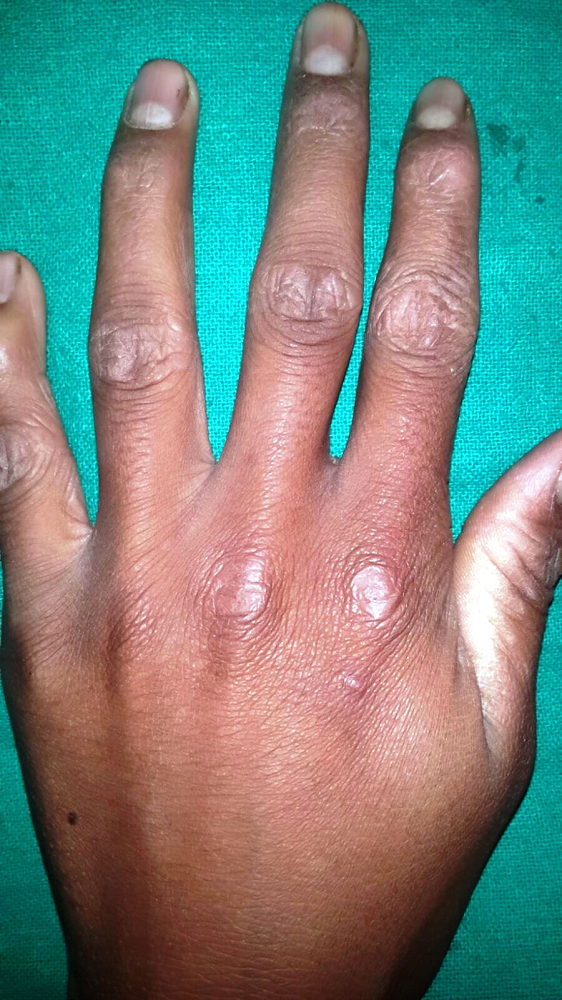 Sclerodactyly of fingers of feet 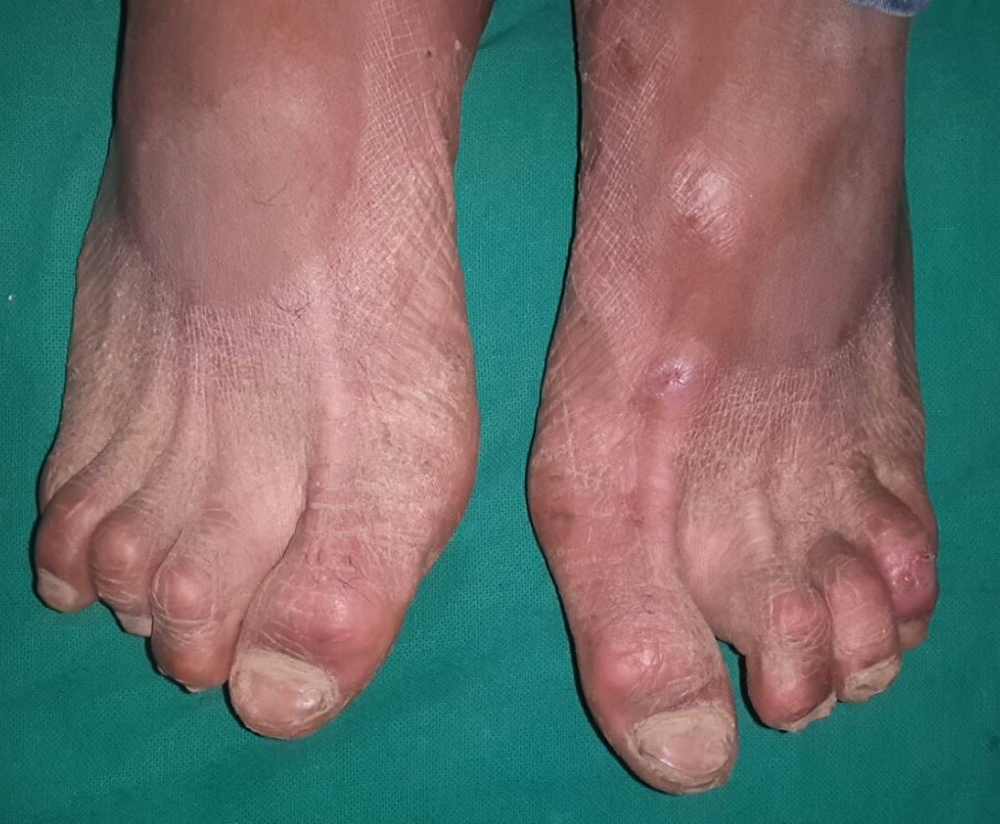 Intraoral examination showed multiple missing teeth. Most of the teeth that present were grade III mobile. Gingiva was slightly erythematous, calculus present but scanty [Figure 7]. The panoramic radiograph demonstrated generalized loss of bone and absence of bone support around the teeth giving a characteristic “Floating in air” appearance [Figure 8]. 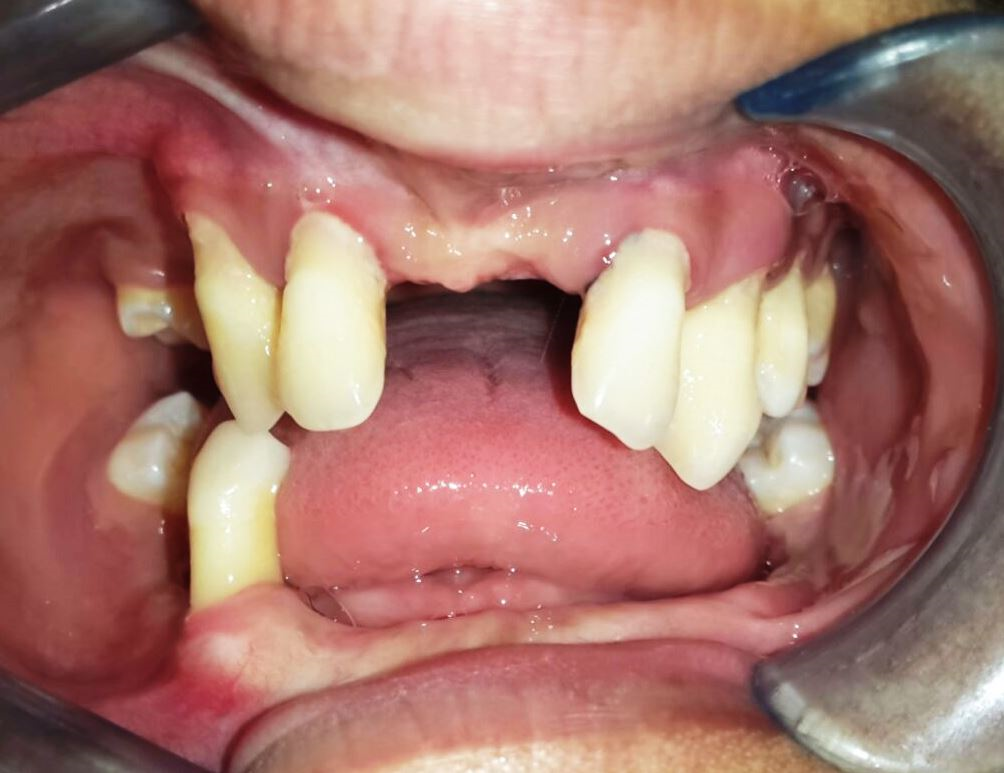 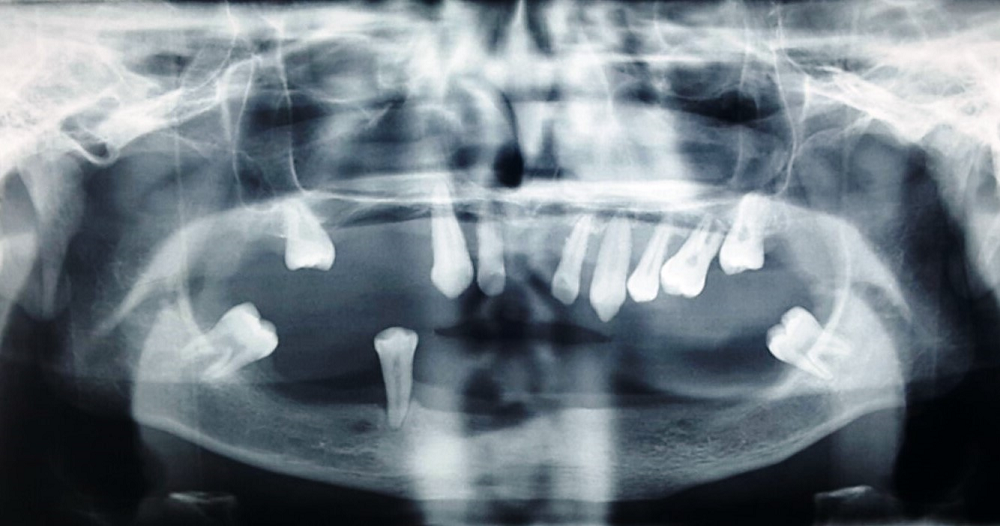 Full mouth extractions were planned. Treatment options for prosthodontic rehabilitation were discussed and a set of complete dentures was planned. The patient was then referred to the Department of Dermatology for management of lesions of the skin where treatment with emollients and Acretenin was initiated.

Papillon-Lefevre syndrome is a rare disorder, inherited as an autosomal recessive manner.

It has been reported to be due to mutation of the cathepsin-C gene, which is expressed in the affected epithelial regions such as the palms, soles and knees and the keratinized oral gingiva. It is also expressed at high levels in various immune cells, including polymorphonuclear leukocytes, macrophages and their precursors.5

The dermatological lesions first appear between 1 to 4 years of age and include palmar plantar keratosis. The lesions may be aggravated by cold also evidenced in this case. Our patient gave history of having recurrent pyogenic skin infections of face, back, axilla followed by atrophic scarring in region of face, a finding which has also been reported by Subramanium et al.6 and may be attributed to the increased susceptibility to bacterial infections in these patients. Similar history of repeated cutaneous infections which led to scarring alopecia on scalp and areas of atropic scarring on trunk was reported by Ahmad et al. (2009).7 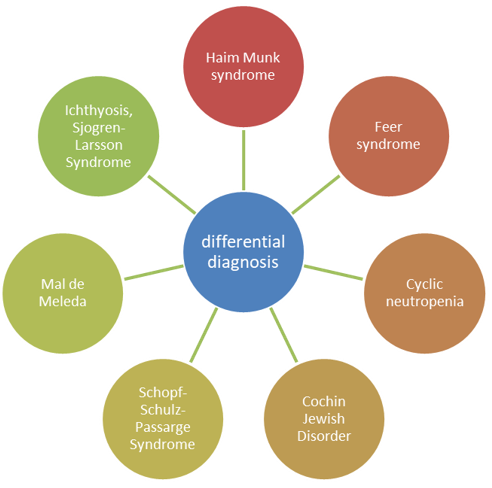 Periodontal changes in PLS include early onset aggressive periodontitis. These patients show severe gingival inflammation and rapid periodontal destruction shortly after eruption of teeth, leading to the premature loss of the primary and permanent dentition.8

Multidisciplinary approach should be used in the treatment of these patients. Oral retinoids including acitretin, isotretinoin and etretinate are mainly used to treat keratoderma and periodontitis.1

Treatment of periodontitis includes oral antibiotic therapy, the use of mouthwashes and professional scaling and root planing of the teeth combined with extraction of the hopeless teeth, but usually, this procedure is not enough. Continuous monitoring and frequent recall appointments have shown to minimize the periodontal deterioration.

Papillon-Lefèvre Syndrome is a devastating disease, due to the associated dermatological manifestations and partial or complete loss of masticatory function due to loss of teeth. This can severely affect the esthetics, psychological, and social well being of the patient at a very young age. The dental surgeon is often the first person to diagnose this condition. A multidisciplinary approach is essential, which includes improvement in overall quality of life of the patient. One must focus not only the dental and dermatological management, but also on psychological counseling of the affected individual.

B Kaur Papillon Lefevre Syndrome: A Case Report with ReviewDent20133114

A I Barrak Papillon-Lefèvre syndrome: a series of five cases among siblingsJ Med Case Rep20161036